On 12 September 2019, Austria deposited with the Director General of the ILO the instrument of ratification of the Protocol of 2014 to the Forced Labour Convention, 1930, thereby becoming the thirty-ninth country worldwide to ratify the Protocol.

Forced labour takes different forms, including sexual exploitation, debt bondage and even trafficking in persons and slavery. According to the ILO global estimates, 24.9 million people are victims of forced labour around the world, of whom 4.8 million are victims of sexual exploitation. In the private sector, forced labour generates some US$150 billion a year in illicit profits. Victims are exploited in various sectors of the economy, such as agriculture, fishing, domestic work, construction, industry and mining.

On depositing the instrument of ratification, Her Excellency, Ambassador Elisabeth Tichy-Fisslberger, Permanent Representative of Austria to the UN Office and other International Organizations in Geneva, stated: “On the occasion of the centenary of the International Labour Organization, General Director Guy Ryder invited all member states to ratify at least one additional ILO Instrument. Austria is glad to take up on that invitation and sign the Protocol to the Forced Labor Convention. With this, we stress once more the relevance and singularity of the International Labor Organization when it comes to setting international standards for the world of work.”

Receiving the instrument of ratification, the ILO Director General Guy Ryder, stated: “I am pleased to receive this instrument of ratification, which bears witness to the commitment of Austria to combat trafficking in persons and forced labour in all its forms. With the ratification of this instrument, Austria is contributing to the ILO “One For All Centenary Ratification Campaign” launched by the International Labour Office in 2019 to celebrate the ILO’s 100th Anniversary. By ratifying the Protocol, Austria is moving ahead towards the achievement of decent work and the delivering at the country-level of the 2030 UN Sustainable Development Goals, in particular SDG target 8.7”.

At the country level, Austria has made significant efforts to combat trafficking in persons, by establishing since 2004 a Task Force on Combating Human Trafficking. It has also adopted the fifth National Action Plan on Combating Trafficking (2018-2020) which includes measures for national coordination, prevention, protection of victims, prosecution and international cooperation. Moreover, the working group on trafficking for labour exploitation has developed a list of indicators for competent authorities regarding the identification of victims of trafficking for labour exploitation, supplemented with information on how to report suspected cases to the Austrian Criminal Intelligence Service. 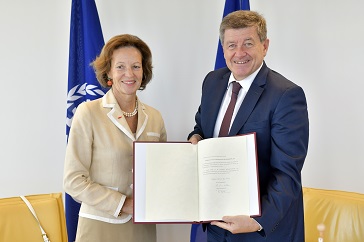