On 10 September 2019, Belgium deposited its instrument of ratification of the Protocol of 2014 to the Forced Labour Convention, 1930, thereby becoming the thirty-eighth country worldwide to ratify the Protocol.

Through this ratification, Belgium is demonstrating its firm commitment to combating forced labour in all its forms. The Protocol, adopted by an overwhelming majority by the International Labour Conference in 2014, calls on ratifying States to adopt effective measures to combat forced labour, including trafficking in persons, debt bondage, or forced domestic labour, and to provide victims with protection and access to effective remedies, including compensation.

On depositing the instrument of ratification, H.E. Ambassador Geert Muylle, recalled that Belgium joins the 37 other States that expressed their commitment to combat forced labour and ranks third in terms of the number of ratifications of ILO conventions. This illustrates Belgium's commitment to promoting the values and principles of the ILO. With this ratification, Belgium has ratified the entire corpus of ILO fundamental instruments. For Belgium, the normative role of the ILO must remain the priority tool for ensuring peace and social justice. This ratification is a concrete act by Belgium as part of the "50 for freedom" campaign.

On receiving the instrument of ratification of the Protocol, Guy Ryder, Director-General of the International Labour Organization, stated: “I am very pleased to receive this instrument of ratification which is a further testimony to Belgium’s ongoing commitment to combat forced labour in all its forms. This ratification is all the more important since the ILO’s global estimates show the urgency of adopting immediate and effective measures to eradicate forced labour and trafficking. The ratification of the Protocol is of special meaning in the year the ILO celebrates its 100th Anniversary, as the Protocol is part of the ILO “One For All Centenary Ratification Campaign” launched by the International Labour Office”.

At the country level, Belgium has a long-standing experience of action to combat forced labour. It has been continuously strengthening its legal framework to combat trafficking in persons through amendments to the Penal Code aiming at clarifying and extending the definition of trafficking in persons. It has also established the Interdepartmental Unit for the Coordination of the Fight against the Trafficking and Smuggling of Human Beings, which coordinates the different stakeholder initiatives against trafficking. Furthermore, it has adopted its third plan of action for the period 2015–19 which comprises seven priority areas, including prevention, protection of victims, research, and prosecution and sanction of perpetrators. 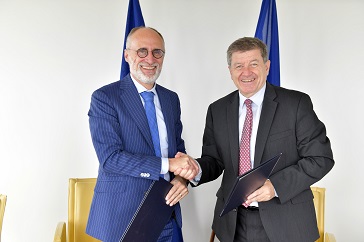