On 19 June 2019, Germany deposited the instrument of ratification of the Protocol of 2014 to the Forced Labour Convention, 1930, with the Director General of the ILO, thereby becoming the thirty-sixth country worldwide to ratify the Protocol.

Through this ratification, Germany has made a formal commitment to apply this international instrument, which gives new impetus to action against all forms of forced labour, including trafficking in persons. It has a significant meaning in the year the ILO celebrates its centenary.

The Forced Labour Protocol requires governments to adopt effective measures to prevent all forms of forced labour and to provide victims with protection and access to effective remedies, including compensation. The ILO estimates that 24.9 million people are victims of forced labour around the world, with 16 million people exploited in the private sector in activities such as domestic work, construction or agriculture; 4.8 million in forced sexual exploitation, and 4 million in forced labour imposed by state authorities. The ILO also estimates that this exploitation generates some US$150 billion a year in illicit profits.

On depositing the instrument of ratification, the Minister of Labour and Social Affairs, Mr. Hubertus Heil, said: “Forced labour and human trafficking are serious crimes that cannot be tolerated. In the 21st century, no one should be exploited. By ratifying the ILO's Protocol to the Forced Labour Convention to combat forced labour and human trafficking, Germany is sending an important message: We will not leave the victims to fend for themselves, and we will step up our efforts to ensure that the perpetrators do not flout the law and get away with their inhuman crimes. Because forced labour and human trafficking take place across national borders, international coordination is needed to combat them. The ratification of the ILO Protocol calls for all of us - governments, social partners, civil society actors and consumers to join forces at both national and international levels to ensure that working conditions are decent and fair.”

On receiving the instrument of ratification of the Protocol, ILO Director-General Guy Ryder, stated: “I welcome with great pleasure Germany’s further commitment in joining the global movement to combat forced labour. This ratification brings us one step closer towards reaching the objective of 50ForFreedom campaign – 50 ratifications by the end of 2019. This is also a crucial step towards the achievement of decent work and the delivering of the UN Sustainable Development Goals at the country-level. In the year the ILO celebrates its centenary, this ratification has a particular significance, and marks a new progression in the ILO Centenary Ratification Campaign launched by the International Labour Office.”

The Government has set up a comprehensive framework for combatting all forms of forced labour. Under the Criminal Code trafficking in persons, forced labour and labour exploitation are offences punishable by a sentence of imprisonment (ranging from six months to 10 years imprisonment). The Government has also taken remarkable steps for the identification of victims of trafficking, for instance special features and indicators for identifying victims were developed by the Länder and were made available to the Länder’s police forces with appropriate training. Moreover, victims are provided with advice and support, including secured accommodation, by specialized counselling centres funded by the Länder. Finally, a reflection period of at least 30 days was introduced in October 2000 for foreign victims without a residence permit. The victim may remain in the country in order to decide whether s/he wants to cooperate with law enforcement or to prepare for a safe return. 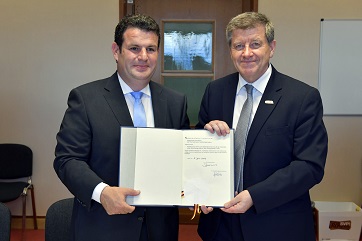