On 17 June 2019, the Government of Canada deposited with the Deputy-Director General for Field Operations and Partnerships of the ILO the instrument of ratification of both the Labour Inspection Convention, 1947 (No. 81) and the Protocol of 2014 to the Forced Labour Convention, 1930, to mark the ILO’s first centenary.

Canada is the 147th country to ratify Convention No. 81, which calls for an effective system of labour inspection. This Convention deals with the organization and functioning of inspection services, the responsibilities of a central authority, their co-operation with other public and private services and with employers and workers organizations, the recruitment of qualified staff in sufficient numbers and with appropriate status, material means and facilities, the thorough regular inspection of workplaces, and the publication of reports and annual statistics on the work of the inspection services. The ratification of Convention No. 81, one of the ILO’s four governance Conventions, marks Canada’s commitment to the enforcement of the legal provisions relating to conditions of work and the protection of workers.

Through its ratification of the 2014 Protocol, Canada becomes the 35th country worldwide to ratify this important instrument, which reinforces the international legal framework for eliminating all forms of forced or compulsory labour, including trafficking in persons. The ILO estimates that about 24.9 million people worldwide are victims of forced labour. The Forced Labour Protocol requires ratifying States to take appropriate steps to prevent forced labour, protect victims and guarantee them access to effective remedies and compensation. In this regard, at the national level, the Government of Canada has taken significant measures to develop its legal and institutional framework for combating trafficking in persons. The prohibition of trafficking in persons is provided for both in the Criminal Code and the Immigration and Refugee Protection Act. Moreover, a National Action Plan to Combat Human Trafficking was released in June 2012, covering areas such as information and awareness-raising, assistance of victims and protection of foreign nationals. The Government of Canada also provides for the granting of temporary resident permits for victims of trafficking.

On depositing the two ratification instruments, Ms Chantal Maheu, Deputy Minister of Labour and Associate Deputy Minister of Employment and Social Development Canada, stated: “The Government of Canada is a strong supporter of the International Labour Organization (ILO) and their commitment to promoting decent work around the world. Over the last one hundred years, the ILO has achieved so much in the fight for workers’ rights, and we will continue to work together for equality, inclusion and fairness at home, abroad, in our workplaces and everywhere else.”

The ratifications of these standards are the 37th and 38th ratifications by Canada, respectively. The new ratifications support the effective promotion of the ILO’s Decent Work Agenda and achievement of the 2030 Sustainable Development Goals.

Convention No. 81 and the Forced Labour Protocol will enter into force for Canada on 17 June 2020. 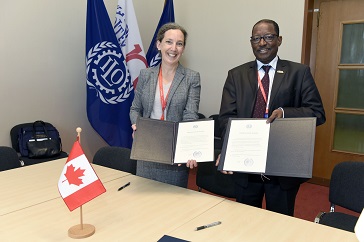