We develop a framework for valuing the contribution of cetaceans to carbon sequestration. In particular, we focus on valuing the role of whales in carbon sequestration, directly through the carbon a whale carries on its body, and, indirectly, through its role in fertilizing phytoplankton. The latter is known to be responsible for capturing 40% of all CO2 and for producing 50% of all Oxygen—that is, every other breath we take. This is also equivalent to CO2 captured by 1.7 trillion trees per year, 4 Amazon forests per year, or 70 Redwood State parks of the USA per year.

We, first, estimate that a whale, on average, captures CO2 equivalent to 27 thousand trees, or 18 acres of forest, per year. The pre-whaling population contribution to carbon sequestration turns out to be equivalent to CO2 captured by over 79 billion trees or 17 thousand square miles of forest, per year.
Using financial economics tools, we develop a financial valuation framework that allows us to price the whale across its various contributions to carbon sequestration, eco-tourism and to fisheries. By viewing the whale as an asset that yields value across its lifetime, we are able to develop a first-ever estimate of the value of the whale at $2 million dollars, on average.

Recently, the IMF highlighted how carbon prices could be used to meet Paris CO2 mitigation pledges, and discussed the impact on CO2 emissions of $35 and $70 per ton carbon prices. At a price of $70 per ton, the value of a whale would be over $6 million dollars, pricing out the demand for whale meat in countries, where the market value of whale could reach less than ninety thousand dollars.

Moreover, with whale migration covering the globe, a whale should be viewed as an “international public good,” and as such warrants the coordination of all nations to help protect these cetaceans from ship strikes, whaling, and entanglements.

The framework we have developed, however, can be used not only to price and value cetacean contributions to carbon but also marine habitats, as well as other entities or phenomena. By doing so, this allows the scientific evidence on the importance and fragile state of our environment to be recast in the public policy space, where policymakers can now estimate the cost-benefit of saving our marine or terrestrial environment, and then devise mitigation measures to help deal with the present danger of climate change.


Ralph Chami is currently Assistant Director in the Institute for Capacity Development (ICD), International Monetary Fund, where he oversaw the development and implementation of the internal economics training program for all IMF economists as well as the revamping of the Institute’s external training program for officials from member countries. Most recently, he was Assistant Director and Division Chief in the Middle East and Central Asia Department where he oversaw surveillance and program work on fragile states: Egypt, Libya, Somalia, Sudan, South Sudan, and Yemen, and was Mission Chief for Libya and Somalia. He is the recipient of the 2014 IMF Operational Excellence Award for his work on Libya. Previously, he was the Chief of the Regional Studies Division, where he oversaw regional surveillance of 32 countries in the Middle East, North Africa and Central Asia regions, and the production of the Regional Economic Outlook. Prior to that, he was the Chief of the Middle Eastern Division of the IMF Institute where he oversaw capacity development in that region. He joined the IMF in 1999. From 1991 till 1999, he was on the faculty of Finance in the Department of Finance, University of Notre Dame in Indiana. He also served as a consultant to the World Bank, and to the private sector in the US.

Ralph Chami has a BS from the American University of Beirut, an MBA in Finance and Statistics from the University of Kansas, and a Ph.D. in Economics from the Johns Hopkins University. His areas of specialization are: banking regulation and supervision, financial markets, and remittances. His hobbies include music and yoga. Ralph is a semi-professional guitarist for over 40 years https://www.youtube.com/user/MusicRC99. 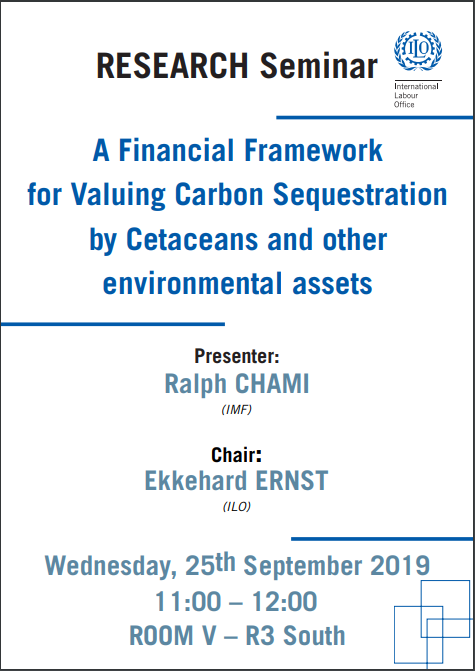