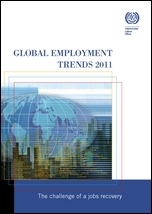 Chapter 1 focuses on the macroeconomic context for growth and employment, and notes that the persistently high levels of unemployment stand in stark contrast to the recovery seen in several key macroeconomic indicators: global GDP, consumption, world trade and many equity markets had all recovered by 2010, surpassing pre-crisis levels. Despite rapid economic growth in 2010 the global unemployment rate stood at 6.2% versus 6.3% in 2009 and well above the 5.6% rate in 2007.

Chapter 3 looks at developments across the various regions of the world. In both Chapters 2 and 3, extensive use is made of country-level data to enrich the global and regional analysis, but also to draw attention to important differences in terms of trends and challenges within regions. Chapter 4 offers policy considerations. It warns that a "narrow" focus on reducing fiscal deficits without addressing job creation will further weaken employment prospects for the 205 million unemployed in 2010.