The Global reality of protracted situations

The world is witnessing the highest levels of displacement on record. In recent years, forced displacement has increased in scale and complexity. According to the UN Refugee Agency (UNHCR), in 2019 there were over 79.5 million forcibly displaced persons, of whom 30.2 million were refugees and asylum-seekers. Eighty-four percent of the world’s displaced are in developing countries; more than half are women.

While forcibly displaced persons face specific vulnerabilities, including psychological trauma, lack of opportunity and protection risks, host communities struggle to pursue their own development efforts in an environment that has been transformed by a large influx of newcomers.

As displacement has become increasingly protracted, the responses are becoming more focused on durable solutions to support more dignified, inclusive and comprehensive programmes for refugees and the communities that host them. Self- reliance and empowerment need to be facilitated, and social cohesion needs to be strengthened.

These responses need to be rapidly consolidated through significant international support built on a foundation of robust and effective partnerships that maximize synergies and leverage comparative advantages.

In this context, a new Partnership initiative has been launched with the support of the Government of the Netherlands that brings together the International Finance Corporation (IFC), the International Labour Organization (ILO), the UN Refugee Agency UNHCR, the UN Children’s Fund UNICEF and the World Bank to support this transformative approach.

The partnership aims to shift the paradigm from a humanitarian to a development approach in responding to forced displacement crises.

A Partnership that places people at the core of its mission

The Partnership is the concrete expression of the consensus that has emerged around the need for displaced persons and host communities to enjoy enhanced economic opportunities and for children on the move to have effective and inclusive access to protection and education (New York Declaration, 2016).

Benefiting from a four-year time horizon (2019–2023) and financially supported by the Ministry of Foreign Affairs of the Netherlands, the Partners will join efforts to develop a new paradigm in responding to forced displacement crises, particularly through the involvement of development actors. The Partnership hopes to transform the way governments and other stakeholders, including the social partners and the private sector, respond to forced displacement crises, by: The Partnership will also be grounded in results-based and country-led approaches. It aims to develop and implement evidence-based solutions, tailored to each context, as well as to test and learn from innovative operational solutions.

Three pillars of the Partnership: education, work and protection

The Partnership will focus on three broad areas that are critical to enabling forcibly displaced persons to overcome their specific vulnerabilities, and host communities to pursue their own development efforts in transformed environments. The three areas are: education and learning; jobs and social protection; and protection and legal status.

Key elements of the ILO's contribution to each of the three pillars include: 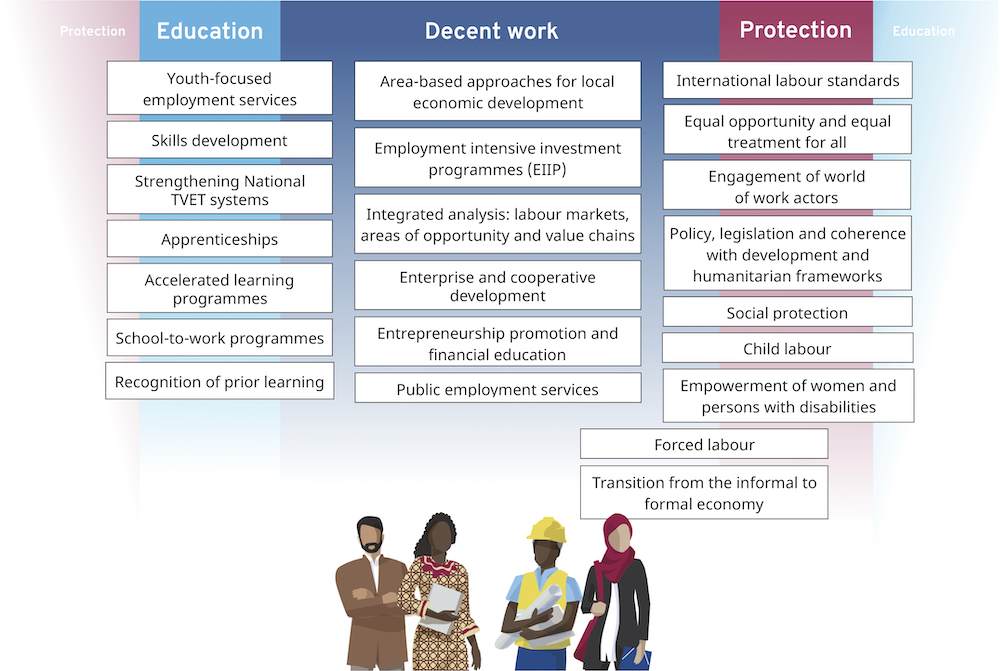