This story was written by the ILO Newsroom For official ILO statements and speeches, please visit our “Statements and Speeches” section.
BEIJING (ILO News) – The International Labour Organization (ILO) and China’s Ministry of Human Resources and Social Security (MoHRSS) have signed a new Memorandum of Understanding defining their cooperation as a strategic partnership.

At the signing ceremony in Beijing, the ILO Director-General Guy Ryder said: “The world and China are being transformed by profound innovation and technological advancement, demographic and geo-economic changes in the patterns of production and consumption. These developments require the ILO and the MOHRSS to renew their strategic approaches on the basis of common values and common interest.”

Speaking at the event, Yin Weimin, Minister of MOHRSS said: “Great changes have taken place in the world economy and the world of work since the MOU was signed in 2001. Over the past 15 years, China has made remarkable achievements in the field of employment of employment creation, social protection and industrial relations with the excellent support from the ILO.” The Minister added that: “China has become the second largest economy in the world now. Therefore it is high time to sign this new MOU in order to consolidate and scale up our cooperation to promote decent work and address the challenges together.”


As China comes to terms with the challenges of economic transformation in pursuit of quality growth, its experience is becoming increasingly invaluable for developing countries around the world in realizing the 2030 Agenda."

The first MoU between China and the ILO, signed in 2001, strengthened collaboration in order to develop labour market policies to guide China’s transition from a centrally planned to a market economy. The new MoU establishes a partnership in realizing the common objectives of promoting social justice, decent work and fair globalization in a world marked by deepening economic integration, rapid economic and social transformation and a pressing need for quality job creation and global policy coherence.

“Today, we mark a new beginning in our partnership,” Ryder said. “China has become a leader on the global scene. Its culture and commerce are once again going global. And as China comes to terms with the challenges of economic transformation in pursuit of quality growth, its experience is becoming increasingly invaluable for developing countries around the world in realizing the 2030 Agenda.”


The ILO and China: Key facts 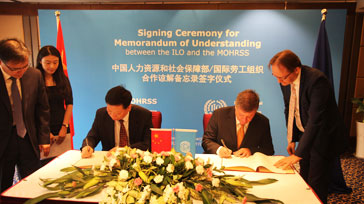