This story was written by the ILO Newsroom For official ILO statements and speeches, please visit our “Statements and Speeches” section.
GENEVA (ILO News) – The global economic crisis has led several European countries to introduce measures to lower costs for enterprises. The aim is to give a cost advantage to exporting enterprises over competitors in other countries.


Before the common currency was introduced in 1999, countries in Europe with large trade deficits would change their currency exchange rates. Today, that is not possible, since they all share the same currency.

Instead, countries choose to lower wages by introducing hiring and working time flexibility, lowering minimum wages and social security contributions – usually from employers – and restructuring enterprises and the state.

These measures push down wage costs while raising output per worker. This ratio, known as unit labour costs, has fallen in several southern European countries but not in France, Italy or the United Kingdom. As a result, Ireland, Portugal and Spain are seeing a rise in exports. 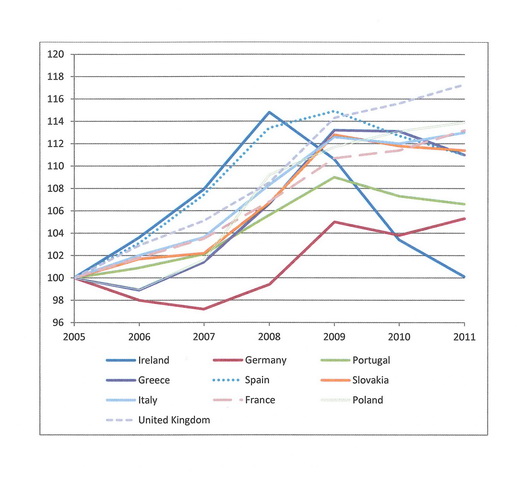 A number of countries have successfully pursued similar policies, but usually with the help of exchange rate devaluations and in quite different economic contexts. This was the case of Sweden in 1992, Argentina in 2002 and Iceland only recently.

Today, when several European countries who are each other’s main trading partners all apply similar policies at the same time, there is inevitably a compound effect. In short, coordinated austerity is making way to coordinated recession. The lesson is that policies valid for one country are not necessarily equally valid for a group of highly interdependent countries.

The social costs of these measures run wide and deep. The European unemployment rate has risen continuously – save for a brief decline at the end of 2010 – from less than 7 per cent in the first quarter of 2008 to 11.6 per cent in September 2012.

Some 26 million Europeans are now looking for employment and not finding any, not counting those discouraged from searching for work or those who can only get part-time work. This has lowered the number of working age persons in employment in the European Union.

The youth are the hardest hit. Avoiding a “no future generation” should be a priority for every European policy-maker.

Undoubtedly reforms are necessary when wage costs run faster than output per worker or when fiscal or trade deficits turn unsustainably large. Reforms are better done with lots of social dialogue. And there are many ways to heal ailing economies including boosting investment, fair taxation, innovation, skills development and much more.

More exports within a depressed Europe are unlikely to be the single measure that will pull countries out of the crisis. Jobs will only move from one location to another, as recent shifts in auto manufacturing have shown, with plants closing in Belgium, France and the United Kingdom and expanding in Spain and Romania.

Avoiding competitive currency devaluations was precisely one of the aims of the common currency. Rebalancing the economy towards domestic demand in countries with large trade surpluses must also occur, starting with Germany whose surplus over the last 12 months is now larger than China’s.

Economic recovery with a return to full employment will require bolder, fairer and deeper measures than the ones currently contemplated by decision-makers drawing on one country-one crisis recipes.