SABHA, Jordan (ILO News) - Since fleeing his Syrian hometown of Aleppo in 2012, 26-year-old Abdel Aziz Al Hussein has been working on a farm in the Northern Jordanian town of Sabha near the Syrian border. He gets paid six Jordanian Dinars (US$ 8.50) picking peaches and nectarines for eight hours a day to support his mother and siblings.

Working in Jordan for years without a valid work permit meant that he has always had to look over his shoulder.

“When we first arrived in Jordan, life was extremely difficult. We had no work permits, and we lived in constant fear of being caught by labour inspectors,” Al Hussein said. “There was a lot of pressure on us when it came to working. We were told that we should not work without work permits and we were always worried that we would get into trouble with the authorities.”

Al Hussein’s family is one of ten living in an informal camp near the farm. Until recently, the majority of the camp residents did not have work permits. They say they were put off from applying for permits by a number of obstacles, including the costly application fees and lack of legal documentation.

But the biggest hindrance was the difficulty of getting a Jordanian employer to apply for a work permit on their behalf.

Thanks to a recent government decision to give Syrian refugees a three-month grace period to apply for work permits, Al Hussein and others like him have been given the chance to legalize their employment status in specific sectors open to non-Jordanians.

The decision follows Jordan’s announcement of a compact at a donor conference held in London earlier this year, whereby Jordan agreed to accommodate a specific number of Syrians in the labour market, in return for improved access to the European market, increased investment and soft loans.

The number of registered Syrian refugees in Jordan now exceeds 650,000, most of whom live outside refugee camps. The government estimates that the total number of Syrians in Jordan is over 1.3 million. Their presence in host communities has increased the informal economy, decreased wages, impeded access to public services, and increased child labour.

As part of its response to the Syria refugee crisis in Jordan, the ILO is working with the government to improve access of Syrian refugees and members of local host communities to Jordan’s formal labour market. The ILO is looking to key economic sectors to find practical means to increase Syrian refugee access to the labour market, in such a way that would fill labour shortfalls, benefit the local communities hosting the refugees and contribute to Jordan’s overall economy.

The work now includes partnering with agricultural cooperatives in Irbid and Mafraq to help facilitate the process of work permit application.

“The government of Jordan has taken steps to make it easier for Syrian refugees to apply for work permits, but they did not initially lead to a significant increase in work permits in the agricultural sector,” said Maha Kattaa, coordinator for the ILO Syrian Refugee Response in Jordan. “The ILO held discussions with Syrian refugee farmers and found that, despite these measures, a dearth of employers willing and able to carry out the paperwork was the main reason for the slow take-up,” said Kattaa.

As a result, the Ministry of Labour, in consultation with the ILO, introduced a new model that includes de-linking the work permit application from specific employers in the agricultural sector, and allowing cooperatives to apply for Syrian refugee work permits.

The initiative includes disseminating clear instructions to local Ministry of Labour authorities to enable them to issue work permits in a timely manner to a greater number of Syrian workers. It also includes information campaigns within refugee communities on how to apply for work permits, as well as on their rights and entitlements under labour laws.


The role of the cooperatives

Mansour Al Fawaz, head of the Agricultural Cooperative Coalitions in Mafraq, said the cooperatives play a vital role in the process.

“Our role together with the ILO is to raise awareness on the importance of work permits through field visits and text messages and other forms of communication,” said Al Fawaz. “We also facilitate the process by undergoing the paperwork procedure ourselves at the local Ministry of Labour authorities so the workers do not have to do it, which has been a great incentive for the workers.”

Salha Al Hussein, who has been working at the farm in Sabha for four years, did not know that she was entitled to a work permit until she met with representatives of a cooperative and ILO officials. She says that she now understands what the benefits of having a work permit are.

“They encouraged us to apply. Now that I have my permit, I feel more comfortable and at ease at work. I feel free.”

Mohammed Al Zboon, head of the local Ministry of Labour authorities in Mafraq, said that his team is ensuring the success of the new model through close coordination with local cooperatives. Since the grace period began, Al Zboon and his team have been holding meetings with Syrian workers to encourage them to reach out to the cooperatives for help.

“This initiative has lead to social cohesion between Syrian refugees and the local community. It is also helping Syrian refugees find stability in working and living in Jordan,” said Al Zboon.

The ILO says that it hopes the grace period, which is due to end on July 4, will be extended to allow the ILO to extend its advocacy work and support for the cooperatives and reach more people.

“We hope to reach another 4,000 Syrian refugees in the agricultural sector before the end of this year as well as to target workers from other sectors,” said Kattaa. “These efforts are all part of the process of formalising the work of Syrian refugees in Jordan and helping the government of Jordan fulfil its commitments of the Compact.” 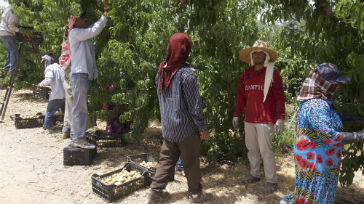 Cooperatives: An old idea, but more relevant than ever in today’s world