The changes in Myanmar since the 2010 elections have been dramatic. The military-turned-civilian government that came to power then has defied sceptics and confounded critics with the breadth and pace of reform in the country. While it is still relatively early days with some serious issues yet to be resolved, Myanmar's citizens are enjoying freedoms they have been denied for the last quarter of a century.

The World of Work magazine of the ILO travelled to the “Golden Land” for a first-hand account of the progress so far – and the challenges that remain – as Myanmar turns a corner on the road towards democratization.

A new path out of adversity

When cyclone Nargis struck Myanmar in May 2008, causing more than 130,000 deaths and ravaging the Irrawaddy delta region in what has reportedly been the country’s worst natural disaster, two small, isolated fishing villages, Maeikthalinkune and Myatthaywawa, were among the worst hit.

The ILO’s infrastructure project on the Irrawaddy delta in Myanmar, not only re-established access to villages devastated by the cyclone but also gave rise to a bustling community life.

Vividly-colored ice-creams are one of the goods now available in several villages thanks to travelling vendors and growing trade.

Ko Hla Htay, the ice-cream vendor, took his business onto the road thanks to ILO-built footpaths that connect the villages which were devastated by cyclone Nargis in 2008.

In 2009, a year after Nargis's passage, ILO built over 80 kilometres of footpaths that replaced muddy forest tracks.

“Next thing we knew, people were buying bicycles – and falling off them as they did not know how to ride them. They had never had any use for them until then."

With the bikes came the trade between the villages, shops were opened, they built a bigger school to cater for children from other areas.

50 foot bridges now link Maeikthalinkune, Myatthaywawa and other nearby villages, forming part of an extended network of footpaths linking villages of the Irrawaddy delta in an effort to make the accessible and create jobs.

The footpaths and jetties made the villages accessible again and allowed the trade to flourish. This shop in Maeikthalinkune has grown and now draws in clients from other villages, too.

Before Nargis struck, people used to have to travel by boat, which took time, now they can just walk. With closer ties between them, villagers get together to discuss common issues, and in the process, they‘re learning to negotiate and reach consensus.

By developing interaction between the villages, the footpaths and bridges also gave people better access to healthcare and education.

The local community is even growing bigger: the villagers trained by the ILO to work on the project are now building footpaths linking other villages. And When asked what other improvements they’d want to see that would make their lives better, the villagers reply: “A wider footpath”.

As often happens in such tragedies, the poor and vulnerable were the worst hit. Among the victims, many women who survived the cyclone suddenly found themselves as the head of their household, and needing to work.

"Business Kind", a non-profit organization set up in response to the devastation caused by cyclone Nargis, employs women to run small businesses that benefit poor communities.

Cyclone Nargis hit Myanmar in May 2008, causing more than 130,000 deaths and ravaging the Irrawaddy delta region in what has reportedly been the country’s worst natural disaster. As often happens in such tragedies, the poor and vulnerable were the worst hit.

Among the victims, many women who survived the cyclone suddenly found themselves as the head of their household, and needing to work.

Their predicament struck a chord with Helen Gunthorpe, an infectious disease specialist from California, who spent several years working with rural communities in Myanmar. She wanted to help the women but go beyond humanitarian assistance and do something that would be sustainable, promote international labour standards and empower people.

Gunthorpe raised funds in the United States and got together with Kyi Kyi ‘Cathy’ Win Oo, a young Myanmar entrepreneur. By June 2008, they had set up “Business Kind”, a non-profit women’s organization based in Myanmar’s main city, Yangon.

“These businesses create jobs for vulnerable women and they not only empower them but help whole communities come out of poverty,” explains Cathy Win.

The Good Sleep programme, in particular, employs many women who are living with HIV/AIDS. The mosquito nets they make are sold at commercial rates at shopping centres and supermarkets and to local and international NGOs. The profits are used to sell nets at a subsidised price to villagers in rural communities, who would not otherwise be able to afford them. The citronella candle-making business is run on the same basis, with profits from retail sales funding low-price candles for rural villages.

The training centre is located in the net-making factory and, in addition to industrial sewing skills, the women get trained in financial literacy and learn about worker rights. Back in April, the ILO invited Cathy Win - as a representative of the workers’ co-operative – to Myanmar’s first conference of labour organizations since the freedom of association law was passed last year.

She says one of the main challenges is organizing the women. “Workers in the garment sector often work 12-hour days [ed. including over-time] and only have Sundays off. They don’t have time to get together and this is especially important in Myanmar where women are really shy.

But there’s been “lots of improvement” since last year, in part due to a series of strikes in different factories across the country and in Yangon in particular, says Cathy. She is now looking ahead. “We’re hoping to get funding for the next two years so we can set up a community centre with a kitchen and a laundry facility, so the women can really have Sundays off.”

And the ambition goes beyond helping women with their household chores. The co-operative has 300 members and Cathy Win is hoping to increase the numbers to ten thousand in the coming years and to start tackling global women’s issues such as the pay gender gap.

All in a day’s work

Myanmar children, women and men at work, from the river banks to the big city. 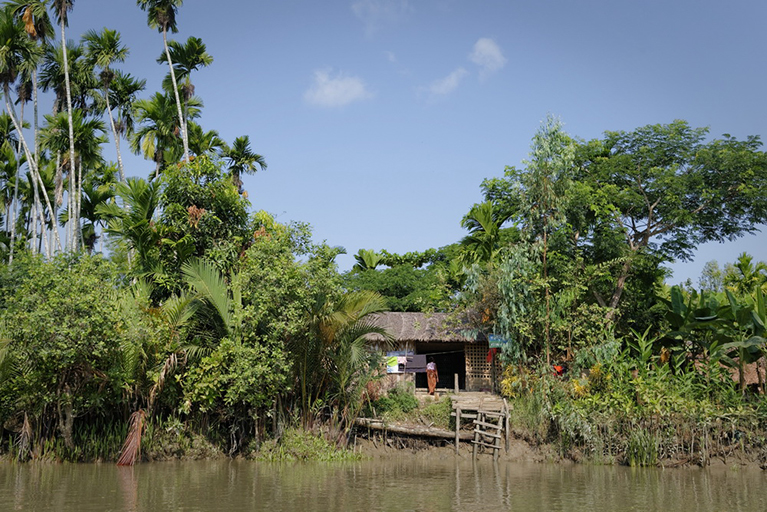 Morning in the delta

A lifetime etched on a face

On a building site

Just off the ferry

Looking after children in a shanty town

Draining sludge from the sewers