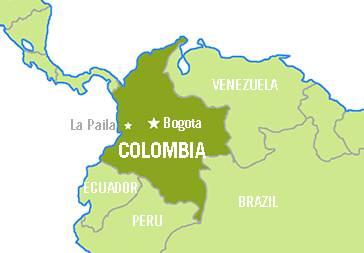 Our impact, their voice

A confection company in Colombia is the scene of an experiment in social dialogue and collective bargaining that has highlighted the importance of industrial relations focused on finding solutions. The ILO visited the Colombina factory in the Cauca Valley.

The noise is deafening in the sweet factory, and the smell of sugar everywhere. Inside a large building, banks of machines produce rows and rows of multi-coloured lollypops, chocolate bars, chewing gum and other goodies that, once they've been packaged, are loaded on trucks and shipped to various parts of Colombia, the scene of our story, and beyond, to the four corners of the world.

The non-stop hustle and bustle at the Colombina factory stands in stark contrast to the apparent calm in the town where it operates, La Paila, in the Cauca Valley. “Some people leave for the city, but life is better in the villages,” says a smiling Germán Dario Rodallega, a food technician who leaves work preoccupied by the village's favourite football team, Deportivo Cali.

Rodallega explains that he now works as a data-entry operator, after being employed as a packager and starting 15 years ago as a mixer, or boleador de barra. “They teach you how to handle the caramel. I was horrified, you should have seen the pots of the stuff. That's the first job I had there,” he says, pointing at the factory.

The future of La Paila and the sweet factory are intertwined. Other nearby villages also depend on the factory. “Anyone who's unemployed here doesn't want to work,” says Rodallega. In his case, that means trade union action. “They asked me to be a delegate and draw up a list of demands … Many of the things we asked for can be found in the collective work agreement.”

That agreement is the direct result of a process of collective bargaining between company and worker representatives that takes place every three years and is nourished by a tradition of social dialogue. Industrial relations have been developed with the support of a cooperation project implemented by the ILO to facilitate that process, chiefly through training activities.

The project, which is financed by the United States State Department, has helped consolidate good industrial relations in various Colombian companies, and to promote the exercise of fundamental labour rights, in particular collective bargaining.

To that end, training and counselling have been dispensed to trade union and company leaders, who together have learned about the benefits of social dialogue and the importance of building a climate of labour peace that is based on respect for labour rights and thereby contributes to company productivity.

Both the members of the trade union Sintracolombina and the representatives of Colombina participated actively in the training sessions, enhancing the dialogue they had been building for years and reasserting their commitment to continue promoting fundamental labour rights among all suppliers and associates.

“Our discussions are frank. We don't always agree, but the discussion is very open and involves great mutual understanding,” says Colombina's executive director, César Caicedo, during an interview in the company's offices in Cali. “We both [the two parties] know that the company has to be very competitive.”

As Caicedo puts it, during the dialogue process “great importance is attached to collective bargaining, which we approach with great solemnity. We have an opening ceremony, the list [of demands] is presented.” He says that in his 14 years at the head of the company, “We've always spent a month, a month and a half negotiating.”

Colombina was founded more than 80 years ago and has become a Latin American leader in the production of confectionery. Initially it made only sweets, but it has since diversified into other foodstuffs and currently has an output of 740 million dollars annually, 40 per cent of which is exported. Its operations employ roughly 9,000 workers in Colombia and about a dozen other countries.

The factory in La Paila is just over 120 kilometres from Cali, near the sugar mill that supplies the raw material. Once inside, the first impression is almost futuristic. The workers move about in white coats and wear protective gear, while the background clamour suggests a high degree of automatization.
La Paila's streets are clean and, in the middle of the day, pretty sleepy. The village, which is not far from the factory, is home to the offices of the Sintracolombina trade union, which is part of the Central de Trabajadores de Colombia (the Colombian Workers Confederation, or CTC). The president, John Jairo Caicedo Villegas, notes that, for at least 50 years, the company's watchwords have been “dialogue, respect and trust in collective bargaining”.


“For us, the most important thing has always been communication,” he says. “We'll always have differences, but the important thing is to handle them with respect. Our policy is not to deal under the table, but rather to lay all our cards on the table, and to speak with each other frankly.” As a result, he goes on, because the trade unions are allowed to exist and collective bargaining is the rule, “We are one of the country's most productive factories. Every single worker in the factory is a member."

For the specialist at the ILO Andean Subregional Office, Italo Cardona, who is in charge of the project providing support for collective bargaining in Colombia, among other activities,  it is obvious that good labour relations and understanding of the importance of social dialogue have been crucial to the successful outcomes achieved.

“Collective bargaining and freedom of association are key components of the ILO's efforts to promote decent work,” says Cardona. He observes that, not only is the impact positive for the workers, companies also benefit, in the form of more committed employees and increased productivity.

“The bargaining process was great,” says Sandra Rivas, who has been working at Colombina for 11 years but only recently obtained her "blue book", attesting to her status as a permanent employee. "We really had to fight ... it was a battle," she says, referring to the action that resulted in her obtaining a contract "thanks to the union".

A married mother of two and a bar-coder, Sandra shares her home with her father and sister. Employment stability has brought relief. “Life in La Paila is the best,” she asserts. “I'm in charge of labelling products with expiry and manufacturing dates. You should see the uproar if I make a mistake.”

The Colombina factory in La Paila produces 90 tonnes of sweets a year and practically never stops. Sixty per cent of its output is sold on the domestic market, the rest is exported.

The factory's human resources management director, Carlos Sandoval, walks through the factory and stops near the bays where trucks are being loaded with boxes of sweets. "The dialogue with trade unions is very important for the company, it's part of the business model. We know that a good dialogue makes us highly efficient.”
Sandoval underscores the role played by the ILO. “We've received front-line training, which has allowed us to understand the world of labour rights and be aware of what it involves.”

Italo Cardona, for his part, recalls that, for the ILO, it is important to replicate these experiences of dialogue. "The aim is to promote decent work, that's true, but also to generate new levels of competiveness that benefit both the company and its workers."