This story was written by the ILO Newsroom For official ILO statements and speeches, please visit our “Statements and Speeches” section.
AKKAR, Lebanon (ILO News) - Utilizing women’s local cooking skills and their knowledge of traditional cuisine, an ILO initiative is supporting a number of women in an agricultural area of Lebanon to create their own cooking and catering lines to generate income, and to affirm their status as valuable members of both their individual communities and the agricultural sector.

The women in question come from struggling rural communities that face particularly challenging circumstances: they are from Akkar, a northern Lebanese district which is Lebanon’s poorest area. And in recent years, it has received large numbers of Syrian refugees fleeing the conflict in neighbouring Syria.

Since the outbreak of conflict in Syria in 2011, the devastating civil war has brought over one million refugees to Lebanon. They now account for one quarter of the tiny Mediterranean country’s population.

The new arrivals need to make a living, and this has had a profound impact on the livelihoods of the communities that host them. In the Akkar area, these host communities mostly rely on agriculture for their livelihood.

“We are working on strengthen the resilience of the host communities in light of the Syria refugee crisis, in an area that is generally very vulnerable, which is Akkar,” said Annabella Skof, a Chief Technical Advisor at the ILO Regional Office for Arab States.

“Our starting point is a sector that is very important for income generation, which is the agricultural sector,” Skof explained.

The ILO partnered with Souk El Tayeb, a Lebanese organization that works on promoting rural and culinary heritage, and with the International Rescue Committee (IRC) to train 25 women on food production and processing, using the most abundantly-grown types of local produce.

“Our village in the Akkar area is very rural, and that means a girl grows up learning how to cook and how to do everything around the house from her youth,” said mother-of-9 Rabiaa Zahraman, an Akkar local and one of the trainees.

“The first time I ever worked (outside the home) in my life was here at the IRC. I learned new types of dishes. We used to prepare many dishes using potatoes, but here we learned new recipes,” Zahraman said.

The programme aims not only to give the women new skills and increase their income and chances of future employment, but also to market surplus potatoes and leafy greens, both of which are grown extensively in the area.

“The idea is that a family does not necessarily have to rely only on potato production by itself. They can produce something out of these potatoes that add value to the primary product and find other channels for distributing it,” Skof explained.


The training initiative also works at making the women more visible within the agricultural sector, and helping them become acknowledged actors within the market system. This takes place initially through selling their products at the Souk El Tayeb farmers’ market in the Lebanese capital Beirut, but also through future entrepreneurial initiatives of their own.

“Many women – in particular farmers’ wives – have a very invisible role. They work on the field but they don’t get paid for it, and they don’t get the credit for producing or selling the produce. What we are trying to do is showcase that women can also have a very visible and important role in such a value chain,” Skof said.

The initiative mostly targets local women from Lebanese host communities, but a number of Syrian refugee women are also involved.

“When we were in Syria, our financial situation was much better than it is here. We came here as refugees,” said Hiam Al Daiey, a mother of four.

“The first work opportunity I received was here at this centre. It is of course a great feeling to get out and see new things, to work, to make some money, and to help others make money too. God willing, we will be able to help our children in the future,” Al Daiey said.

At the IRC centre in Akkar, Souk El Tayeb experts trained the women on using professional hygienic and presentation standards to produce both traditional and innovative dishes with a range of shelf-lives, from fresh salads and appetizers to preserves and vacuum-packed produce.

“This training targets developing women’s skills, and specifically skills that can be implemented at home, to enable women to rely on themselves and to create work opportunities,” said Cyril El Khoury, an IRC Senior Livelihoods Officer.

The women also received training on such skills as packaging, quality control, marketing and costing, and on best techniques for face-to-face interaction with buyers.

“I learned how to have more self-confidence,” said Zahraman. “In the past we used to say: ‘No, we don’t have the courage to face people. No, we can’t. No, it’s difficult for us to speak to people.’ But now we – and I in particular – have gained courage.”

Under the brand name of “Atayeb Akkar” – or “Akkar Delicacies” – the women have now begun to market their line at the Souk El Tayeb Beirut farmers market. The ILO has paid for a stall at the market for a set number of weeks to help establish the Atayeb Akkar line in the market.

“When we met the women in Akkar, we saw how enthusiastic they were about developing themselves and developing this area and helping, if only in a small way, to address this problem,” said Jihane Chahla, Project Manager at Souk El Tayeb.

The initiative is part of an ILO project titled “Enabling Job Resilience and Protecting Decent Work Conditions in Rural Communities Affected by the Syrian Refugee Crisis in Northern Lebanon,” which supports Lebanese communities hosting refugees in north Lebanon with the financial support of the Government of Italy.

The project investigates difficulties facing agriculturalists in the area as a result of the Syria refugee crisis – such as increased competition, rising production costs and loss of markets – and implements practical solutions using value chain development methodology, in partnership with the local and national organizations of North LEDA, the Rene Moawad Foundation, the Safadi Foundation, the Mada Association and others. 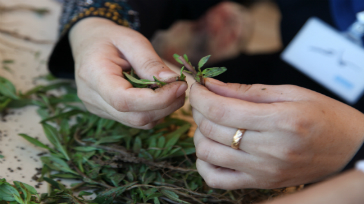