This story was written by the ILO Newsroom For official ILO statements and speeches, please visit our “Statements and Speeches” section.
CHANDRAPUR, India (ILO News) – When Deepak Mhaisekar* was told that he was HIV positive it came as a shock to him.

Since 2001, Mhaisekar had been working for Maratha Cement Works (MCW), a plant of India’s leading cement manufacturer Ambuja Cement Ltd. The latter is part of the global conglomerate Holcim, one of the world’s leading suppliers of cement, employing some 80,000 people on production sites in around 70 countries.

Mhaisekar fell into depression – rather because he was afraid of losing his job than being concerned about his health. He felt to be physically fit at the time and his Anti-Retroviral Treatment (ART) only started three years ago.

“My HIV status was first confirmed in 2008, although there were no signs or symptoms related to HIV. It was accidentally detected in a blood donation camp organized by the Occupations Health Centre of (MCW),” he explains.

He confided in his wife and children about his HIV status and convinced them to get their HIV testing done. “Fortunately, they were all negative,” he tells us with great relief.

His colleagues are still not aware of his HIV status: “Only a few of my relatives know my status. So I have not faced discrimination at any level till now.”

Mhaisekar thinks that the company’s strong commitment to non-discrimination based on HIV and to support the provision of anti-retroviral treatment helped a lot in this respect. It filled me with confidence that even if I reveal my status I will not be discriminated against,” Mhaisekar says.


It enlightened us to the need for more awareness, understanding, eliminating myths and dealing with HIV positive people in a sensitive and non- discriminatory manner.”

Besides the medical check-ups, he received extensive counselling and support from specially trained people." Hospital staff helped me a lot by explaining me the technical details of HIV and AIDS and when the ART was eventually started, these persons helped me to tide over the side effects with proper moral support and adequate treatment. Thanks to their support and guidance I also could enjoy my sexual life taking the necessary precautions.”

All this motivated him to continue working to his full potential: “In fact, this year I have been rated 4 out of 5 during my performance appraisal, which means excellent and speaks volumes of the positive effect of the company policy. It also proves that a person living with HIV can deliver work equal to that of a person without HIV or even more.”

Pearl Tiwari who is heading the Corporate Social Responsibility (CSR) department at Ambuja Cement Ltd. admits that her company has come a long way over the last 10 to 12 years: “Previously we lacked information and sensibility with respect to HIV/AIDS.”

“Our cooperation with the ILO and subsequently putting a policy in place for the company enlightened us to the need for more awareness, understanding, eliminating myths and dealing with HIV positive people in a sensitive and non- discriminatory manner.”

It also helped the company “to look beyond our immediate fence and work with targeted groups – our own truckers as well as commercial sex workers among others, to create awareness not just within but around our plants.”

The association of the ILO with Ambuja Cement Ltd. dates back to the year 2004. The ILO helped to draft the workplace policy on HIV and AIDS, and train batches of employees as master trainers drawn from all units of Ambuja Cement. Each year, 15 to 20 employees are trained by the ILO as master trainers. The trainers help to create awareness about HIV and AIDS within the company and in related communities.

Ambuja Cement is also partnering with the ILO in the “Getting to zero at work” campaign that was launched in India 2013. Building on the campaign, the VCT@WORK initiative is being implemented for promoting voluntary counselling and testing (VCT) among workers, as it provides a gateway for seeking information and services related to HIV and AIDS. More than 6900 and 5400 people were reached through awareness raising during 2013 and 2014, respectively.

According to Dr. Prakash Pokharna, the nodal person for the HIV/AIDS workplace programme at MCW, Ambuja Cement Ltd. the programme successfully continues to reach out to the employees, contract workers, truckers coming to the units and the community. The workplace initiative by the companies have been contributing to the national AIDS control Programme.

Other companies have followed the example of Ambuja Cement Ltd. which was one of the first in India to put a policy on HIV and AIDS at the workplace, twelve years ago. Thanks to the ILO and other similar programmes, India has achieved an overall reduction of 57 per cent in estimated annual new HIV infections (among the adult population) during the past decade from 274,000 in 2000 to 116,000 in 2011.

“The cement industry is literally the building block of a nation. The example of Ambuja shows that it can also be the bedrock of corporate social responsibility and sound human resources policies with respect to HIV and AIDS,” concludes Alice Ouédraogo, Director of the ILO Programme on HIV/AIDS and the World of Work (ILO/AIDS). “Despite a number of innovative approaches in companies around the world, the role of public-private partnerships in the global response to HIV and AIDS is yet to be fully optimized.”

* Name has been changed to protect the privacy of the interviewed worker. 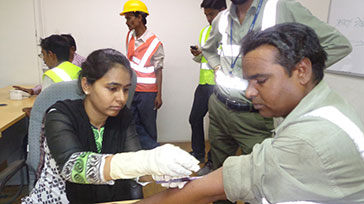