GENEVA – The International Labour Organization (ILO) is deeply saddened by the death of former UN Secretary-General Kofi Annan who led the United Nations admirably for a turbulent and challenging decade.

“The world has lost a great champion for peace, social justice and decent work with the passing of Kofi Annan,” said ILO Director-General Guy Ryder, reacting to the news of his death. “Though it is a sad day for us all, his legacy will live on.”


The world has lost a great champion for peace, social justice and decent work with the passing of Kofi Annan."

Driven by the idea of ‘don’t think no’, and a proud son of Africa, he embraced diversity for the enrichment it brought to common endeavours and brought his global vision and human compassion to the fight against poverty, injustice and disease.

A Nobel Peace prize winner, he was a staunch defender of human rights as the foundation of security and development. Annan was a strong advocate of the ILO’s Decent Work Agenda, a constant champion of the ILO’s mandate and action. In 1999, he told leaders at the World Economic Forum in Davos: “You can uphold human rights and decent labour and environmental standards directly, by your own conduct of your own business.”

Youth employment was a particular concern for him. In July 2001, he came to the ILO in Geneva to launch an initiative on youth employment, together with former ILO Director-General Juan Somavia. “We cannot afford to let this vicious circle continue any longer. Youth is our most valuable asset. They are the leaders of the future, they are the future,” he said at the launch.

After leaving the UN, Annan remained a strong advocate of decent work and social justice through his Foundation.

We have lost a genuine friend and staunch ally in the fight for social justice. 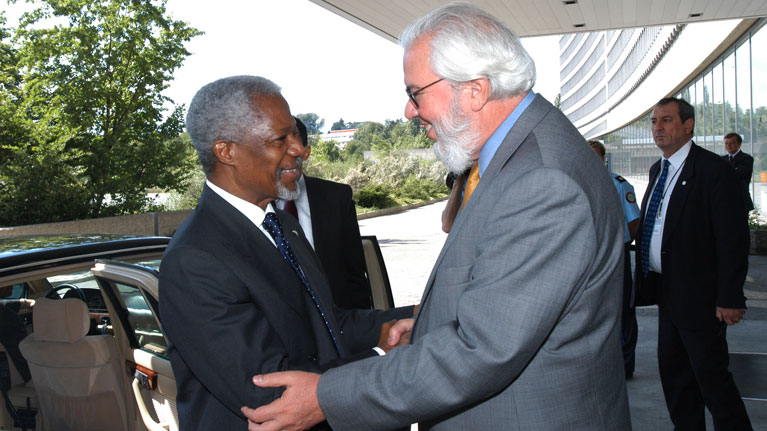