Ministers of Labour of Brazil, China, Russia and South Africa,

Secretary of the Ministry Shankar Aggarwal,

It gives me a real sense of pleasure to join you at this second meeting of the BRICS Labour and Employment Ministers, this time held under the Presidency of India.

Let me first of all express my regret for my absence from the first day of this important Ministerial Meeting, and offer you a word of explanation.

I am sure you will all appreciate the importance of the signature of the historic peace accord in Colombia two days ago that brought an end to a conflict of 52 years, one that had taken a terrible toll of the world of work.

The ILO was involved in the consolidation of the peace process and I have signed an agreement with the Government of Colombia about our role in its further consolidation in the future as well.

Three of the main issues emphasized by President Santos of Colombia when he spoke on Monday were the creation of decent work; formalization of the informal economy, particularly in the rural economy; and the extension of social protection to the entirety of the population. There is a remarkable consistency and link to the themes of your discussions here yesterday and today.

I have been struck by the openness of your exchanges on the challenges and on the policy measures needed to address them, and I congratulate you, Ministers, on the Declaration adopted today as your work has been extremely productive.

Your Declaration has emphasized the importance of collective solutions and indeed, that is exactly what is required. In the present context of slow growth, these are important not only in your respective countries and for the BRICS community as a whole, but they have significant implications for the whole of the world economy, taking into account the size of the labour force in the BRICS countries - 45 percent of the world total - and the political and economic weight that the BRICS have.

I was struck by Professor Sharma’s remark this morning that while at the turn of the century the BRICS accounted for 8.2% of the world economy, today it stands at 22.5% as your background documents show. In the context of the 2030 UN Agenda for Sustainable Development, I wonder what that figure will be in 2030 and what implications that will have for the attainment of the Sustainable Development Goals.

while you came together to form the BRICS political community under different economic circumstances and performances, the value of your cooperation for finding common solutions can only be further enhanced at a time like today when both the world as a whole, and your countries individually and collectively, face different, complex and multiple challenges.

This New Delhi Ministerial Declaration is the expression of a very strong political will to rebound from the current wave of slower growth, or even negative growth in some cases, that our countries are experiencing in different ways and extents. Of course India has been able to maintain growth rates in excess of 7 percent, and we recognize and admire that experience. China has adopted to a new normality and its growth rates are still high. But in general we face a low growth context.
I wish to particularly congratulate you on your choice of issues – not easy issues but ones that must be discussed: employment generation, formalization of labour markets and social protection.

All three are important pillars not only for overcoming the conjunctural challenges we have today, but for getting the BRICS on a higher growth trajectory. They are also important for attaining the SDGs, not just Goal 1 on poverty reduction and Goal 8 on Full, productive, freely chosen employment and decent work for all, but the entirety of the Agenda for Sustainable Development.

In all three areas, BRICS countries have shown remarkable success and performance in this century. And more importantly each of your countries has a track record of successful policy innovation for employment generation and poverty reduction, employment guarantee schemes, and extension of social protection including cash transfer systems; and a number of BRICS countries have established remarkable good practice in reducing informality and creating sustainable pathways for transition to formality.

I want to acknowledge and congratulate all your Governments on your individual and collective will and commitment to redouble focus on measures that can boost growth and quality employment generation. While there may be concern with fiscal space in some countries and about the limits of monetary policy, the facts are that economic growth policies with a high multiplier impact on employment, and including social transfers for the most affected – as your experiences have shown - whether through investments in infrastructure, in public employment schemes, or other active labour market policies, can go a very long way in reconnecting with the dynamism that has characterized the BRICS economies.

Thereby, indeed, the BRICS can once again collectively become the drivers of global economic growth that they were following the global recession that hit us in 2008, and help the global economy achieve a vigorous rebound from today.

The ability to generate quality employment has much to do with economic and investment policies. These issues, and the decline in price of commodities and the contraction of trade that has affected growth prospects, were strongly underlined in the recent G20 Leaders’ Communiqué, the “Hangzhou Consensus” that underscored the importance of economic diversification and industrial upgrading to benefit from more open global markets. And I think in this regard, your respective diverse experiences and future orientations with respect to productive transformation in the agricultural, manufacturing and services sectors and in value chain upgrading across sectors of the economy will be crucially important. I want also to emphasise the importance that you have given to supporting SMEs as that is where very many new jobs are going to be created.

Your Declaration also deals with the technological and structural changes that are transforming the world of work and the need to prepare the future while addressing present challenges. Through such reflections, the BRICS countries will make an essential contribution – across and because of their diversity of situations and experiences – to the global Centenary Initiative on the Future of Work that the ILO had adopted. We need to consider a very long time horizon, and recently I have attended very stimulating meetings in Beijing and in New Delhi that will help us do just that.

You have also laid stress on skills development including life long learning and on promoting fair conditions of labour mobility including through arrangements for portability of social security of migrant workers, and implementing policies and programmes that encourage innovation and entrepreneurship for employment generation. I cannot speak without welcoming the focus on youth employment, and at the same time you have not neglected the gender gap – the need to focus on closing the gender pay gap and the gap in labour market participation rates.

Regarding transition to formality, your commitment to maintain the pace, in spite of slowdown in economic activity in some cases, through a comprehensive and integrated perspective combining generation of new decent end formal employment opportunities together with measures that facilitate transition for those currently in the informal economy, are particularly important. I would recall that it was BRICS countries that played an important role in the discussions that in 2015 brought about the adoption of ILO Recommendation No. 204 concerning the Transition from the Informal to the Formal Economy and which sets a road map for the actions that we must now take.

I particularly welcome and support your commitment to strengthen tripartite social dialogue processes for advancing on all the objectives that you have set in the Ministerial Declaration. I have read the written contributions from the Employers and Workers, and as you have emphasized their part of the work of the BRICS is essential.

The task of addressing present challenges while preparing for the future is not an easy one, but maintaining the focus as you have done in the Ministerial Declaration and setting in motion mechanisms of cooperation and consultation are of paramount importance.

In this regard, I want to particularly congratulate you on the steps taken to establish a network of lead labour research and training institutions in BRICS member states, which is a good way to build joint research and training activities. The ILO will lend its full support and cooperation to this endeavour in any way it can.

In closing I would like to offer some brief reflections on the importance of the BRICS labour process. Here as at the first Labour and Employment Ministerial in Ufa you have shown the openness and frankness that is so essential to discuss issues in the right way, and I congratulate you on your approach in this manner. It is a privilege for the ILO to provide its technical assistance to your essential work and we are at your disposal to continue research.

The BRICS represents countries from all regions of the world, and does so in a way to extract common solutions from your various situations. Just as between Ufa in January and Delhi today there was a difference in temperature of 50° centigrade but the importance of the meetings was a common one, so are the BRICS countries succeeding in finding common solutions to the challenges you face.

We welcome and look forward to continued cooperation under the forthcoming BRICS Presidency of China.

We wish the BRICS every success in the future and congratulate you on what you have achieved in Delhi under the excellent and much appreciated Presidency of India. 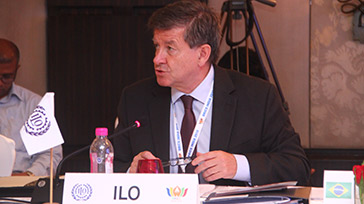 Transition from the Informal to the Formal Economy Recommendation, 2015 (No. 204)
Skip to top