The theme of this year’s World Breastfeeding Week “Breastfeeding and Work – Let’s Make it Work!” highlights the importance of supporting working mothers to breastfeed. I am pleased to endorse this workplace initiative and to align the ILO’s support with that of UNICEF and the WHO.

Breastfeeding is a cornerstone of children’s survival, health, growth and development. Ensuring adequate maternity protection and time and space for breastfeeding at work is not only the right thing to do, it also makes economic sense. Women who have adequate maternity benefits value their employers, leading to job satisfaction and loyalty. Likewise, breastfed children fall sick less often, resulting in fewer days that care givers are absent from work.

Workplace action has a key role in increasing breastfeeding rates.

The International Labour Organization has adopted three maternity protection Conventions that stipulate protective measures for pregnant women and for women who have recently given birth. One hundred countries worldwide now provide at least 14 weeks maternity leave in accordance with the ILO Maternity Protection Convention, 2000 (No. 183). Additionally, provisions are made in at least 121 countries for breaks, mostly paid, or reductions in daily working hours for nursing mothers.

Many countries have relevant national legislation regarding the establishment of facilities for nursing at or near the workplace. Still, the large majority of the approximately 830 million women workers in the world do not have adequate maternity protection. Almost 80 per cent of these workers are in Africa and Asia. Women working in the informal, seasonal or part-time economy may face even greater barriers to continue breastfeeding. It is often the poorest women in poorer countries who receive the least protection and who require extra support and services at home, at the workplace and in the community.

Global momentum to support breastfeeding needs to reach new levels, from national to local action. It is time to mobilize the actors in the world of work - governments, employers’ and workers’ organizations – to act in concerted effort with the health, nutrition, and gender equality communities so as to enable working women to breastfeed and reap the benefits both for themselves and for the health and well-being of future generations. The ILO is committed to working with partners to make the change happen. 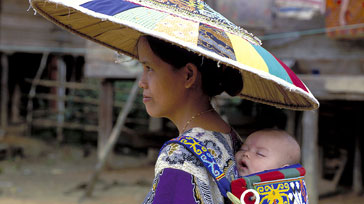