The Initiative addresses four main areas, identified through research and consultations: These issues are highlighted in the 2030 Agenda for Sustainable Development, which provides the global development framework for action for the coming years. The Initiative has global, regional and national components, and links to the other ILO centenary initiatives, in particular the future of work initiative.

ILO-Gallup: Towards a better future for women and work: Voices of women and men, provides a first-ever account of global views and experiences of women and men regarding women and work. Based on a representative sample in 142 countries and territories, the ground-breaking report confirms that most women want to be working in a paid job, and that men agree. But work-family balance/access to care is the major obstacle that women face globally, as acknowledged by both women and men. The results have major implications for focusing policy responses around the globe. Country-level data is available in the report and online.

This survey clearly shows that most women and men around the globe prefer that women have paid jobs. Family-supportive policies, which enable women to remain and progress in paid employment and encourage men to take their fair share of care work, are crucial to achieving gender equality at work."

Women at Work: Trends 2016 report, provides a snapshot of where women stand today and how they have progressed in the world of work over the past 20 years. It also presents an in-depth analysis of the gender gaps in the world of work and explores the key policy drivers for gender transformative change. The discussion and recommendations focus on three main dimensions: sectoral and occupational segregation, the gender wage gap, and gaps in the policy framework for work/family integration.

World Employment Social Outlook: Trends for women 2017, updates the labour market trends and provides predictions up to 2021 based on current trends. It also highlights the significant economic benefits if the G20 target of reducing the gap in participation rates between women and men by 25% by the year 2025 were to be reached globally.

World Employment and Social Outlook: Trends for Women 2018 – Global snapshot captures the progress made during the past decade and assesses women’s labour market prospects by examining the gaps between men and women according to a selection of ILO statistical indicators, namely labour force participation, unemployment, informal employment and working poverty.

Transformation of women at work in Asia: An unfinished development agenda, highlights challenges that women across Asia face in gaining access to decent work, and makes important policy recommendations.

Women in business and management: Gaining momentum, provides a comprehensive picture of women in management positions in businesses. Despite measures to break the glass ceiling, there are still significant hurdles for women to reach senior positions. An Asian report was launched at a regional conference in Singapore in July 2015 and the MENA report was launched in Oman in February 2016. A conference was held in Lima for the Americas and the Caribbean in May 2017, and a regional report was also published.

The Conference was held in Geneva from 3-5 July 2017. The focus was on the future of work, and there was a strong emphasis on issues at the heart of the women at work centenary initiative, including focusing on care jobs and the care economy as an opportunity for the future of decent work.

The International Labour Conference World of Work Summit was dedicated to the theme of “A better future for women at work”. A curtain raiser video was screened at the event that involved an interactive dialogue among ILO constituents/experts on women at work and eliciting thinking on the issue from world leaders, as well as highlighting transformative action that has been taken by a range of stakeholders. Three women Heads of State, from Malta, Mauritius and Nepal, addressed the Summit.

An international conference took place on 18-19 May 2017 to assess whether current legal strategies and policies have failed to break cycles of disadvantage, and how to chart a new course for action. A selection of academic papers and blogs informed the discussions.

A Global Gender Dialogue took place in Helsinki in November 2016, hosted by the Nordic Council of Ministers. The Dialogue provided a platform to take stock of the Nordic models and experiences in relation to gender equality in the world of work, and to exchange with international constituents and experts from all regions. A specific focus was placed on the experience and analysis of promoting women in leadership and promoting work-family balance. Two think pieces were prepared for the dialogue.


Asia-Pacific Regional Conference: Women and the future of work in the Asia-Pacific

Following an APEC workshop on Improving quality employment opportunities for women, supported by the Government of Australia, the Government is partnering with the ILO to develop a regional report and host a high-level regional conference on ‘Women and the Future of Work’ in 2018.

Launched in September 2017 during the UN General Assembly, EPIC is a multi-stakeholder partnership, led by ILO, UN Women and OECD, to contribute to the achievement of the 2030 Agenda for Sustainable Development, which calls for equal pay for work of equal value. EPIC is founded on the recognition that no single actor can solve this challenge alone and that efforts can be accelerated through leveraging expertise across a diverse range of stakeholders.

The ILO’s flagship Global Wage report will focus on gender wage and earnings inequalities, and will also provide data that will be included in The future of women at work report (see below).


Violence and harassment in the world of work

The ILO has embarked on a standard-setting process on “Violence and Harassment in the World of Work”, which will be considered by the ILC according to the double-discussion procedure.

The first discussion of the item took place in June 2018, on the basis of two technical reports previously prepared by the Office. With a clear agreement on the timeliness and necessity of a response to violence and harassment, the first discussion concluded that the instrument should take the form of a Convention, supplemented by a Recommendation.

With a view to the second discussion, the ILO has recently published a third technical report (Report ILC.108/V1), which contains draft texts of a Convention supplemented by a Recommendation. The Office calls for comments and amendments from Governments, after consultation with the most representative organizations of workers and employers, on the content of this Report. These comments will be reflected in the fourth and final report on the item, to be considered by the ILC at its second discussion in June, 2019.

A core theme that has emerged from the Initiative is the need to focus more on care work, both as an area of employment growth as well as a means of supporting women’s equal opportunities in the world of work. A web portal on the care economy has been developed. The portal showcases the extensive work of the ILO in this area that involves different ILO departments. This animation  shows the care spectrum and how each stage is linked to decent work.

A major ILO report on Care work and care jobs for the future of decent work was launched in June 2018.  The report takes a comprehensive look at unpaid and paid care work and its relationship with the changing world of work and the persistent gender inequalities at work. The report calls for doubling the investment in transformative policies to recognize, reduce and redistribute unpaid care work and rewarding and representing care workers.

The report, its new indicators and regional briefs were broadly disseminated and follow-up policy work at global, regional and country levels is being developed in coordination with ILO regional offices and UN partners.

The Government of Flanders is supporting the work on the care economy in the context of the initiative, with contributions from the Government of Sweden. Two training manuals for childcare workers have been developed and piloted in the Arab states, one targeting migrant domestic workers, and the other targeting refugees and host communities.


Gender and non-discrimination: country and regional-level

The Sweden-ILO partnership directly supports the women at work centenary initiative through the cross-cutting policy driver on gender equality and non-discrimination. The project is aimed at building capacity of governments, workers’ and employers’ organizations, to overcome structural barriers that lead to persisting gender gaps in the world of work in Côte d’Ivoire, Jordan and Cambodia, and in Latin America.


The future of women at work

The ILO’s women at work initiative and the adoption of the 2030 Agenda for Sustainable Development could provide a transformative road map, to give new impetus to ILO constituents’ action to achieve gender equality and non-discrimination. To support this reflection, a major report, the future of women at work, is scheduled to be released on International Women’s Day 2019. The report will bring together the different elements of the Initiative, and provide original data and analysis, and identify effective policies that could galvanize meaningful action to accelerate the pace of change. The report is expected to make a significant and innovative contribution to closing the gender gap in its multiple forms, and to the achievement of the SDG targets. 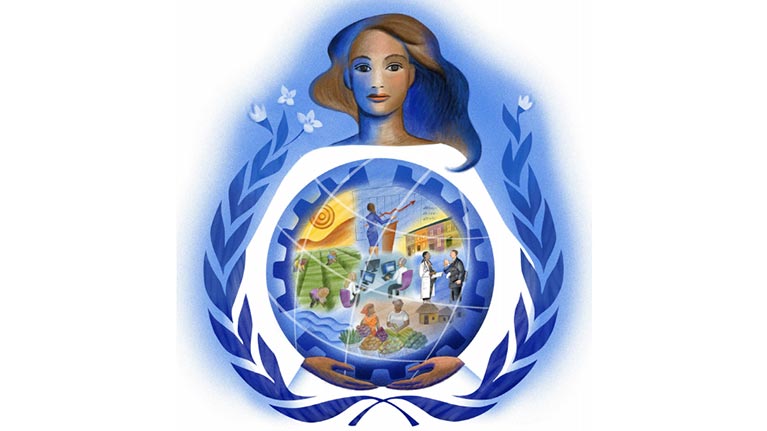 The future of gender equality at work