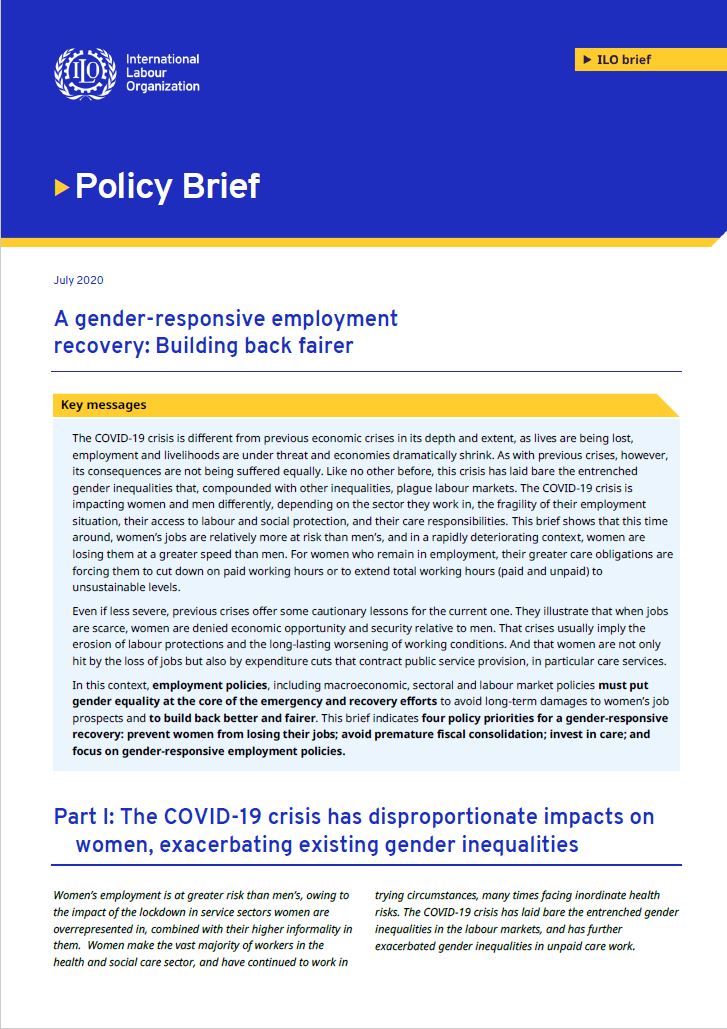 Download:
The COVID-19 crisis is different from previous economic crises in its depth and extent, as lives are being lost, employment and livelihoods are under threat and economies dramatically shrink. As with previous crises, however, its consequences are not being suffered equally. Like no other before, this crisis has laid bare the entrenched gender inequalities that, compounded with other inequalities, plague labour markets. The COVID-19 crisis is impacting women and men differently, depending on the sector they work in, the fragility of their employment situation, their access to labour and social protection, and their care responsibilities. This brief shows that this time around, women’s jobs are relatively more at risk than men’s, and in a rapidly deteriorating context, women are losing them at a greater speed than men. For women who remain in employment, their greater care obligations are forcing them to cut down on paid working hours or to extend total working hours (paid and unpaid) to unsustainable levels.

Even if less severe, previous crises offer some cautionary lessons for the current one. They illustrate that when jobs are scarce, women are denied economic opportunity and security relative to men. That crises usually imply the erosion of labour protections and the long-lasting worsening of working conditions. And that women are not only hit by the loss of jobs but also by expenditure cuts that contract public service provision, in particular care services.

In this context, employment policies, including macroeconomic, sectoral and labour market policies must put gender equality at the core of the emergency and recovery efforts to avoid long-term damages to women’s job prospects and to build back better and fairer. This brief indicates four policy priorities for a gender-responsive recovery: prevent women from losing their jobs; avoid premature fiscal consolidation; invest in care; and focus on gender-responsive employment policies.