At its 104th Session (2015), the International Labour Conference (ILC) adopted the Recommendation concerning the transition from the informal to the formal economy (Transition from the Informal to the Formal Economy Recommendation, 2015 (No. 204)) based on strong tripartite consensus and near unanimous vote, following a two-year process of consultations.
This new Recommendation is of strategic significance for the world of work and for the future of work: it concerns half of the global labour force and more than 90 percent of small and medium enterprises worldwide who are working and operating in conditions of informality. This is the first international labour standard to focus on the informal economy in its entirety and diversity and to point clearly in the direction of transition to the formal economy as the means for realizing decent work for all and for achieving inclusive development.

The Recommendation No. 204, of universal relevance, acknowledges the broad diversity of situations of informality including specific national contexts and priorities for the transition to the formal economy and provides practical guidance to address these priorities. It clearly defines a broad and detailed scope of application to all workers and economic units - including enterprises, entrepreneurs and households - in the informal economy. Such informal work may be found in all economic sectors and in public and private spheres.

Recommendation No 204 provides guidance to Members to pursue a threefold objective:
(a) facilitate the transition of workers and economic units from the informal to the formal economy, while respecting workers’ fundamental rights and ensuring opportunities for income security, livelihoods and entrepreneurship,
(b) promote the creation, preservation and sustainability of enterprises and decent jobs in the formal economy and the coherence of macroeconomic, employment, social protection and other social policies; and
(c) prevent the informalization of formal economy jobs.

The Recommendation is built on a shared understanding and experience of ILO constituents that it is through an integrated strategy, a policy mix and institutional coordination to promote the employment and income opportunities, the rights and social protection of the millions involved that transition to the formal economy can be best facilitated.

The 2015 ILC also adopted the Resolution concerning efforts to facilitate the transition from the informal to the formal economy that invites governments, employers and workers jointly to give full effect to Recommendation No. 204. Hence, at its 325th Session in November 2015, the Governing Body adopted the plan of action which establishes the priorities of strategy for action by the Office for the period 2016–21 or three biennia aiming at giving effect to the related resolution in support of constituents’ efforts to implement the Recommendation. 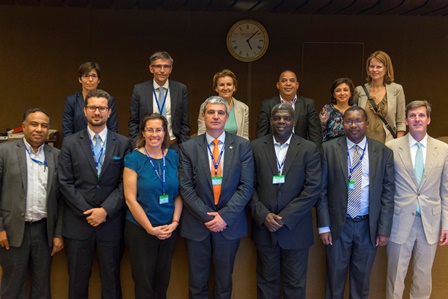 Ways out of informality: How a new ILO standard tackles the informal economy trap
Skip to top