Ningbo Dongrun is a fast-growing Chinese manufacturing company in the Yuyao city of Zhejiang Province. Established in December 2000, the company specializes in fabric products such as outdoor awnings, trolleys and camping beds. Their products are primarily exported to Australia, USA and European markets. Prior to SCORE Training, the company was experiencing low productivity due to inefficient operating procedures, weak implementation systems, poor time management, and excess accumulation of raw material and finished products. Workplace communication between management and staff was also lacking, and inadequate workplace safety standards increased the risk of accidents.

To address these issues, encourage worker-manager communication, and set the company on a path to productivity, Ningbo Dongrun decided to train its staff in two SCORE Training modules: Workplace Cooperation and Safety and Health at Work.

A baseline assessment was conducted as step zero of SCORE Training to identify key areas of improvement. Following this, the company set up an Enterprise Improvement Team (EIT) – a key feature of SCORE Training – comprised of workers, managers, men and women. The objective of an EIT is to establish a joint problem-solving mechanism in a company, and also enhance worker morale.

Since traditionally all decisions in Ningbo Dongrun were taken by managers, workers initially were hesitant to fully participate in and contribute to discussions. But the company stayed the course, and persistently held daily and weekly EIT meetings. It upgraded existing facilities and introduced new ones with specific benefits for women. Most importantly, it introduced a ‘suggestion reward system’ through which managers recognized employees’ suggestions and rewarded them publicly.

These simple initiatives demonstrated to the workers their company’s commitment to them and went a long way in not only fostering open communication in the factories both horizontally and vertically, but also motivating workers to engage actively in meetings and improvement projects. One example of this is the company’s current assembly line production, which was suggested by a front line employee to ease up the transportation process, minimize product damage during transit, and reduce working time. 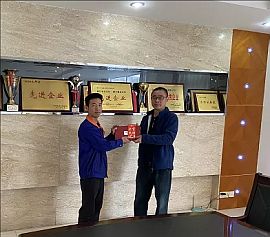 A factory employee receiving a reward from the factory manager

To accompany these improvements, Ningbo Dongrun incorporated and widely socialized the Workplace Cooperation module’s 5S approach (Sort – Set in order – Sweep – Standardize – Self-discipline), as well as the Safety and Health at Work module. Led by the EIT, it remodelled its production areas by reselling warehouse stocks, storing usable items in different parts of the workshop, returning defective materials for replacement, recycling waste moulds and discarding other waste, all of which contributed to clear fire safety passages and easy access to fire-fighting equipment. In fact, the company got rid of 18 large trucks’ worth of unusable items in just the first one month of implementation. Not just this, the company also took active steps to promote book-keeping and inventory management, shifted all tools and machinery to appropriate and easy-to-operate locations, organized awareness workshops on safe handling of chemicals and emergency strategies in case of fire/electricity hazards, and conducted competitions among workshops to promote 5S and OSH (Occupational Safety and Health).

“SCORE Training is in line with the reality of the company's development. All employees have participated in it, offered suggestions, and carried out vigorous rectification through 5S management. At first glance, I was shocked. I cleaned up 18 large trucks of sluggish items. There was no place to stack the semi-finished products produced before. But now, the cleaned up area can be used for production planning."
Mr. He XiangDong
Managing Director

How did these minimum yet effective changes benefit the SME? 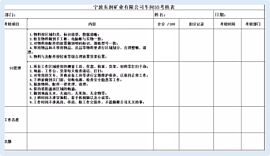 Two training modules and many reforms later, Ningbo Dongrun fully endorses SCORE Training’s emphasis on continuous improvement. Today, the company has moved away from traditional ideas of management, and transformed towards more inclusive and collaborative systems. They continue to advance communication tools put in place by SCORE’s classroom training as well as on-site coaching, and promote collaboration between company leaders and staff to identify new day-to-day challenges and their solutions. Not just this, workers are also encouraged to use each other’s strengths and experiences to enhance productivity, innovation and engagement.

As it happens, Ningbo Dongrun is actively involved in sharing its SCORE experience and good practices with several SMEs in the other region, and provide practical advice and support. It also plans to participate in more SCORE Training modules in the future to continue improving its services, innovate products and satisfy customer and worker needs alike, without compromising on its business profits.