"I experienced what workplace cooperation is.
It is all about communication, trust and respect."
Marilyn Quevedo, Worker

Following SCORE Training and implementation of the SCORE methodology, the enterprise has solved problems related to the internal working relations in the workforce. This was achieved with the voluntary participation of workers and with leadership from the management team. AMFA VITRUM began with Module 1: "Workplace Cooperation" leading to a new dynamic between managers and workers, which meant they started solving problems together. Likewise, the problems related to high labour turnover and absenteeism decreased with the implementation of Module 4: "Human Resource Management ", which led to positive results in the short term. What the new team spirit will achieve in the longer term remains to be seen but hopes are high.

"There are many things that we have to feel proud of. The Enterprise Improvement Team (EIT) is much more active now than at the beginning. It is possible to express our point of view and debate among us, which has helped us a lot. We are looking forward to find a common vision and design a manual that standardizes the manufacturing process"
Luis Fernandez, Worker

The EIT team is formed by 15 people: 2 senior managers, 4 administrative staff, 2 supervisors and 7 floor workers from different production lines. Through the EIT, more people get to know about SCORE advantages and many of them want to participate in the process. The EIT meets weekly and prepares minutes that are published and sent by email to all team members. The EIT also created a WhatsApp Group to speed . up communications related to the Improvement Projects in execution. During the SCORE Training, staff actively participated in the interactive workshops and other staff (outside of the EIT) were invited to be heard at the weekly meetings.

The EIT Team is a big support, it is a space to be heard that did not exist before. Before, there were weekly meetings too; however, only the manager presented weekly targets and he was the only one who spoke; nowadays, everybody speaks and the dialogue is fluent in the meetings, everyone has a chance to be heard.

Labour absenteeism has been reduced as a direct result of SCORE Training, fostering involvement, self-discipline and attendance at the workplace. There are now rules to avoid delays and absenteeism, which have been understood by everyone. Before, it was common to be late or miss work. Likewise, some procedures and instructions encouraged by SCORE Training, have been incorporated in the ISO 9001 quality system.

The future outlook is positive for the factory. Managers are more involved in key work issues and workers often complete the tasks assigned in EIT meetings earlier than scheduled. Minutes of the EIT meetings are also important as a basis for fulfilling these tasks, as everyone is on-board with the priority tasks at hand to improve systems and processes. The implementation of SCORE methodology is ongoing, applying what was learned and now without external support from SCORE trainers. The motivation is high to continue to communicate together as a team and continuously improve the workplace, which also has a positive impact on the bottom line for the company and workers.

The key results in data

• Raw material waste reduced
From 10.4% in March to 5.8% in 7 months (March- October 2018).
• Staff turnover decreased
Up to August 2018, on average 15 people quit during the first three months after hiring. Now, workers stay longer, on average between 5 and 10 months. The company is hoping to continue this trend to keep staff for longer through suggestions to continue to improve working conditions. 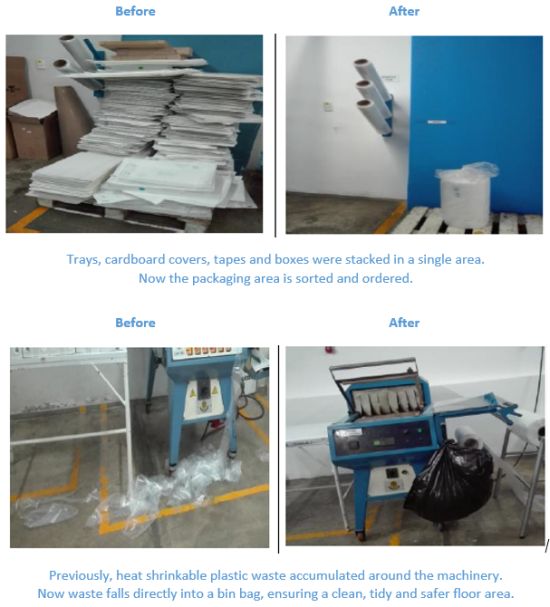 A culture change that supports growth

"It was something like opening your eyes, I did not know what SCORE Training was, but it sounded good. Sometimes, we had a lot of concerns, but nobody listened to us. I like working with the SCORE methodology because now we are all heard. The joint work allows us to have the tools we need to work more efficiently"
Oswaldo Anchante - Worker

Following SCORE Training, workers and managers know each other on both professional and personal levels. To increase discipline and implement changes, it could have caused some uncomfortable feelings; however, workers participation in new decisions was encouraged, especially by giving them the opportunity to present their concerns and suggestions in EIT meetings, which has minimised discomfort and increased communications resulting in a win-win situation for all.

The SCORE methodology implementation, like any change, generated some resistance in the beginning, but the benefit for all was quickly seen and now everything is going smoothly. Workers feel that they have been part of the process. As one of them said: "... yesterday they told me that people like me are very much respected, and if all workers were like me, we could solve the company´s problems (...) the meetings are more interesting, the leaders take notes, we are motivated, we like it, and we are going to continue changing so we can continue improving" (Luis Fernandez).

After just 3 months practicing the SCORE Training methodology Amfa Vitrum has seen an upswing in motivation across the board which has positively impacted productivity. Solid foundations have been laid and now everyone is engaged to build on this early success. Continuous improvement and the team dynamic has been integrated in to the company culture and the benefits shared by all.

Click here to see a video from AMFA VITRUM S.A.