At the end of SCORE Training Module 1 – Workplace Cooperation – A foundation for business success, Meiyue Knitting Co.’s Enterprise Improvement Team (EIT) began tackling the low-hanging fruit of workplace disorganisation, communication, and cleanliness. As time went on, thanks to the continued efforts of the EIT and the improvements everyone could see around them, employees became more and more comfortable voicing their suggestions. About 2 months into implementing the methods learnt through SCORE Training, one employee suggested a relatively simple change that would benefit both the business and the workers. The suggestion was for the company look into replacing the existing expensive fluorescent bulbs that did a poor job in lighting all the workshops. Meiyue Knitting was paying high electricity bills each year with little ability to control the amount used, since adequate lighting is a necessity in any workplace. The employee suggested that LED lights could perhaps provide a solution for a more efficient lighting source, while decreasing costs.

Out with the old (bulbs) and in with the new…

LED lights, which stands for ‘light-emitting diode’, are “directional” light sources. This means they emit light in a specific direction unlike compact fluorescent bulbs, which emit light and heat in all directions. For this reason, LED lighting is able to use light and energy more efficiently, saving companies electricity costs while emitting a high quality, bright light.

Workers and managers then got to work discussing the costs and benefits of switching over to LED lights. Their rough calculations were promising: with a total of 404 existing compact fluorescent bulbs, Meiyue was spending at least 40,000 Yuan (almost 6,000 USD) each year on electricity. Switching all bulbs over to LED would save the company 25,000 Yuan each year (about 3,600 USD), and the costs of switching would be completely covered by electricity savings within 3 months. 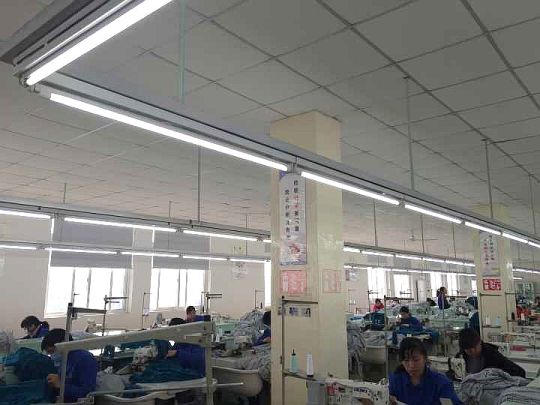 Confident that their investment would pay off, the EIT began to phase out 70 fluorescent bulbs in the garment factory in February 2016, with plans to replace all bulbs across all workshops and offices by June. Since beginning the LED switch in February Meiyue has cut its energy use in half from 5 Kwh per production unit to just 2.4 Kwh. With Modules 1 and 5 now completed, the enterprise has seen notable decreases in employee absenteeism, labour turnover rates and significant cost reduction while employees at Meiyue Knitting Company enjoy a more productive, safer, and brighter workplace.