COLOMBO (ILO NEWS) – 10 years ago today, governments, employers’ and workers’ organisations adopted a landmark new labour standard International Labour Organization (ILO) Convention No. 189 and Recommendation No. 201 on decent work for domestic workers. Since then, 32 countries have ratified C189; but none in South Asia, where many women and men are in domestic work, and where many migrant domestic workers originate.

In Sri Lanka, there are over 80,000 domestic workers according to a 2016 Labour Force Survey, of whom more than 66,000 are women. Despite their wide presence and extensive contribution to household and care work, these workers lack legal recognition and are virtually invisible as part of the informal economy labour force, according to a 2020 study by the Centre for Women’s Research for the ILO.

“Domestic work in Sri Lanka sadly operates outside the full protection and purview of labour laws, making the largely female workers extremely vulnerable to exploitation. The landmark ILO C189 and R201 provides solid guidance on how to protect these workers in policy, law, and practice, while recognising their immense contribution to society and economies” notes Simrin Singh, Director, ILO Country Office for Sri Lanka and the Maldives. “Ratification would indeed signify Sri Lanka’s commitment, leadership and belief to protect the rights of all workers – including domestic workers”.

Across Asia and the Pacific, 61.5 percent of domestic workers remain fully excluded from labour law. The vast majority remain without limits on normal working hours and the right to weekly rest. Despite their enormous contribution to households and care responsibilities, domestic workers generally earn some of the lowest wages. Only 11 percent of domestic workers in the region enjoy a legal minimum wage equal to that of other workers. Only 19 percent are entitled to paid annual leave. These are some of the findings from an ILO global report Making decent work a reality for domestic workers: Progress and prospects ten years after the adoption of the Domestic Workers Convention, 2011 (No. 189) released today.

In Sri Lanka, in the absence of unemployment insurance or income support for domestic workers during COVID19, 70 percent of the survey sample stated that going to work is more important, than staying home even at risk to their own health and that of their families’.

“Our main objective in relation to workers in the informal sector”, said PROTECT Union’s Kalpa Madhuranga, “is to make social protection benefits available to those workers and ensure welfare measures and better service conditions for them.”

Risks to Safety and Health at Work

Domestic workers are vulnerable to chemical, ergonomic and physical hazards; and women in particular to violence and harassment. As their workplace is someone else’s home, they are unseen behind high walls and closed doors. There is no inspection of their workplace nor application of workmen’s compensation in the event of accident or illness. 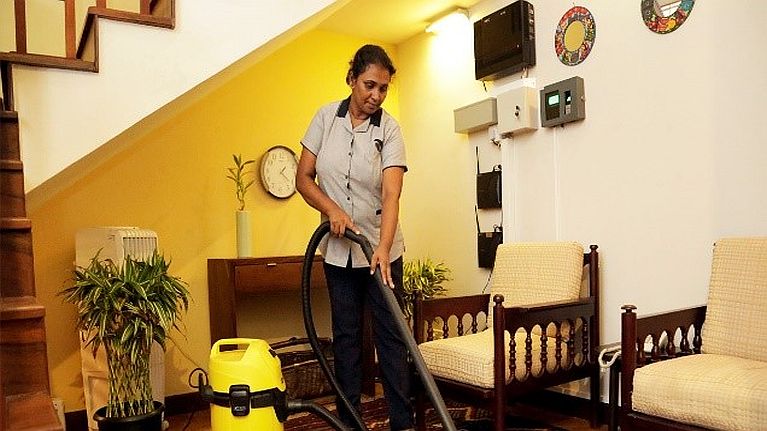 Live-in domestic workers have been confined to their place of work during the COVID19 pandemic. According to domestic workers’ organisations, some have experienced mental and psychosocial issues due to long periods of separation from their families during lockdowns and with inter-provincial travel restrictions.

Protecting domestic workers in the short-term will require training and awareness on COVID19 guidelines, provision of personal protective equipment, and assurance of occupational safety and health during the pandemic situation.

“There is an urgent need to formalize domestic work in the Asia Pacific, starting with the inclusion of domestic work in labour and social security laws, to ensure that these vital workers are offered the protection and respect they deserve,” said Chihoko Asada Miyakawa, Assistant ILO Director General and Regional Director for Asia and the Pacific.