COLOMBO (ILO News): This year’s ‘World Day Against Child Labour’ focuses on the impact of conflicts and disasters on child labour. Eliminating child labour in Sri Lanka contributes to achieve Target 8.7 of the Sustainable Development Goals and accelerates the progress of global initiative, Alliance 8.7. Sadly, as per recent figures, there are still a sizeable 168 million children around the world that engage in child labour, many of whom reside in conflict and disaster affected regions.

The issue is particularly topical in Sri Lanka, where many children have been previously effected by both conflicts and disasters, depriving them of livelihoods and leaving them with no choice but to work. As it stands, 43,714 Sri Lankan children are currently engaged in child labour- comprising 1% of the nation’s children. Of these children, 39,007 work in hazardous forms of child labour.

On 22nd June, in collaboration with the Girl Guides Association and the UNICEF, the ILO hosted an event in Colombo to raise awareness on how Sri Lanka can protect children from child labour, particularly in conflict and disaster situations.

Ms. Simrin Singh, ILO Country Director for Sri Lanka and the Maldives, gave an impassioned opening address at the event, appreciating the nation’s untiring commitment to eradicate child labour, whilst also underscoring the importance of seeing the fight through to the end. “Unfortunately, the Asia and the Pacific region is known to have the highest number of children engaged in child labour, which is approximately 78 million- roughly 1 in 10 children. Against this backdrop of dismal figures, there is room, however, for some optimism, especially here in Sri Lanka… That being said, Sri Lanka stands at a delicate moment in making child labour one for the history books. It is precisely this 1% - often the hardest to reach and most vulnerable - that we need to dedicate our energies to bring the incidence down to a zero.”

The event also involved a panel discussion, a play advocating against child labour by children as change agents, and speeches by the girl guides themselves. The panel discussion pointed out various key issues: from the loss of livelihoods during disasters, to vulnerability to trafficking during conflict and disaster situations. The rich discussion also touched on the importance of incorporating the gender dimensions of child labour in conflict and disaster situations, the vital importance of a stable educational and personal security net for children, and the importance of partnerships between government, international organisations, communities and civil society.

The sentiment of tirelessly working together towards eradicating child labour was reiterated by Mr S.A.N. Saranatissa, Secretary of the Ministry of Labour and Trade Union Relations and Sabaragamuwa Development. Listing various past efforts and future pathways to child labour eradication, he said, “Our expectation is to create a better protection environment for children in the country. 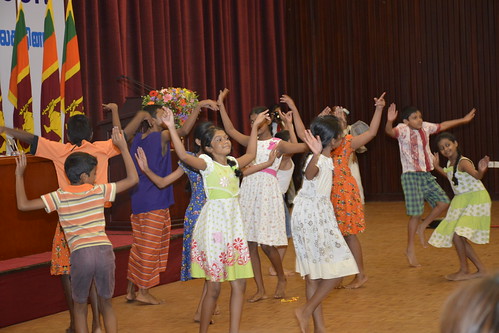 In conflicts and disasters, protect children from child labour
Skip to top