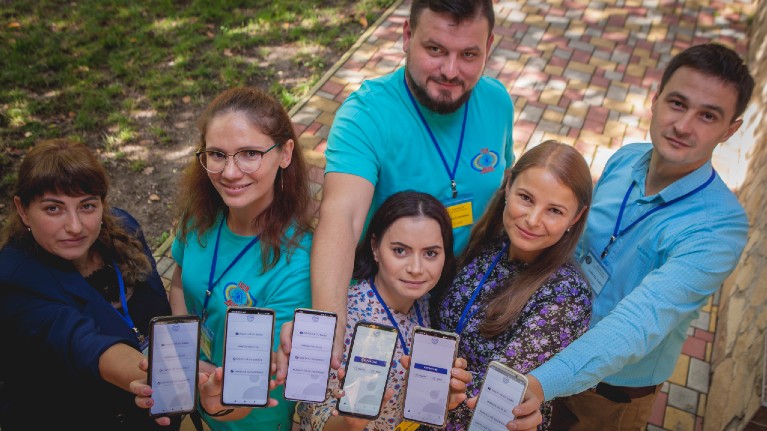 As a new service to workers, the ILO assisted Moldovan trade unions to develop and launch a new application, which informs workers about labour-related questions and offers trade union members to report labour rights violations to Trade unions and the State Labour Inspectorate.

The application “Workers’ Rights” is a user-friendly tool informing about changes in labour legislation, occupational safety and health regulations, or social insurance matters as well as trade union services. Subscribers receive notifications from Trade unions with news and latest developments.

The general information platform can be downloaded by anyone interested, while the reporting function is only available to trade union members. When a case is being reported through the app, it collects memberships status, the industry, the type of labour law violation, and information about the worker reporting the case. Based on these information CNSM decides whether to share a case with the Labour Inspectorate. Cases can also be reported anonymously or on behalf of another person.

The objective of the workers’ rights mobile application is to raise awareness of labour rights and to provide protection at work. If workers know better about laws and regulations and they have access to legal remedy in case their rights are violated, they are more likely to stand up for their rights.

“The mobile application offers the opportunity to report cases of workers’ rights violations and ensures that employers are accountable. CNSM will provide all the necessary support to amend cases when infringements in labour law occur. These situations can be prevented and reconciled if there is cooperation between employers and trade unions’ organizations ", says Igor Zubcu, President of the CNSM.


In North Macedonia, a similar mobile application “My Worker’s Rights” was launched in April 2021 by the Federation of Trade Unions of Macedonia (SSM) and the State Labour Inspectorate, also with support from the ILO. In the country, by the end of June 2022, there were 333 reported cases of violations, covering 12,612 workers. 59 per cent of cases is in process and 41 per cent of the cases has been closed. The most frequent rights infringements were related to the right to paid vacation (18 per cent); salary, allowance, salary contributions (15 per cent); unpaid fees (13 per cent); and changed employment contracts (12 per cent). The ILO and the Moldovan trade union movements are confident that a similar outreach can be achieved in the near future in Moldova. The figures from having introduced the app during the first weeks in Moldova are promising.

The Romanian-language app can be downloaded from GooglePlay for Android and will soon be available in AppStore for iOS mobiles. Two weeks after the launch, about 3,000 unique users visited the application, and roughly 400 people downloaded it.