The COVID-19 crisis has not spared businesses in Ukraine. The public policy measures put in place to contain the spread of the virus resulted in significant operational disruptions for many enterprises. Almost one quarter of surveyed enterprises reported complete shutdown, whereas 40 percent operated partially at the time of the survey. Only slightly more than a quarter operated at full capacity, either on site or remotely. 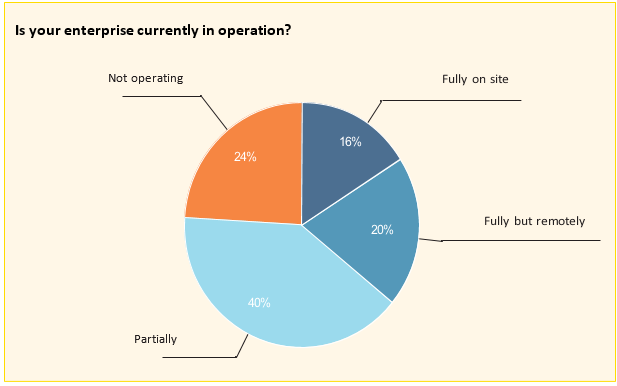 Under the current restrictions, almost one-third of enterprises anticipate they will be able to hold up for the next 2 to 3 months and nearly one-fifth indicated that their business would remain open for the next 3 to 6 months. The operational capacity of one-fifth of the enterprises surveyed is more distressing as they expect the lifeline of their business to be cut after 2 months. Only 6 percent of surveyed enterprises have been unaffected by the crisis.

Collapsing demand and supply are straining the finances of enterprises. More than half of surveyed enterprises assessed the level of financial impact as high (over 50 percent decline in revenue/sales), whereas almost 40 percent estimated the impact as medium (decline ranging from 20 to 50 percent). On the issue of liquidity shortages, almost 50 percent of surveyed enterprises indicated they did not have access to any source of funding to help their business recover. Almost 30 percent rely on loans and grants while another 30 percent have their own cash reserves.

These interconnected challenges naturally have an impact on the workforce. The data shows that 11 percent of surveyed enterprises were not able to retain their workers. Of enterprises that had to dismiss workers, a quarter dismissed over a third of their workforce, while 30 percent dismissed a small proportion between 1 and 5 percent. If the restrictions continue, the prospect of job cuts are worrying with 36 percent of enterprises signalling that they will be forced to resort to layoffs. 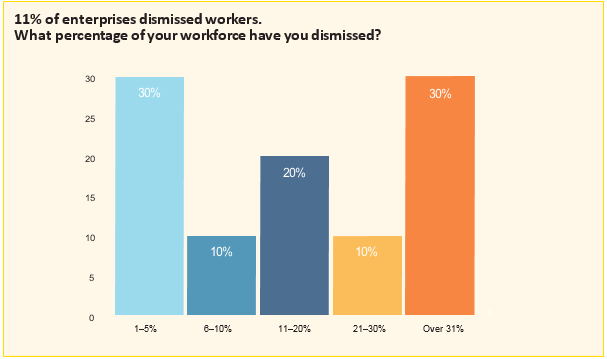 Among the top 3 challenges faced by the enterprises due to COVID-19 are incapacity of business partners to operate normally (76 percent), incapacity of suppliers to provide inputs (49 percent) and working capital deficit (34 percent).

While government support schemes are supposed to be a real lifeline for business, when asked about their perception on the effectiveness of these measures, the majority of enterprises indicated that their needs were not met (58 percent) or only partially satisfied (39 percent).

Looking into the future, business sentiments in Ukraine are showing confidence with the largest share of enterprises surveyed (40%) expecting that the recovery period would take between 1 and 3 months. Only 3% of enterprises indicated that they expected the worst case scenario of being temporarily or permanently closed.

The FEU’s report encompasses a number of recommendations structured around three pillars (financial, tax and administrative) among which access to liquidity (cheap or interest free loans); wage subsidies; reduction of tax rates, exemption from payment of taxes/social contributions, deferral of tax and loan payments, temporary ban on some imports and others.

The rapid assessment was implemented within the DANIDA/ILO project "Inclusive labour markets for job creation in Ukraine".

The full report is downloadable from here in Ukrainian and in English.