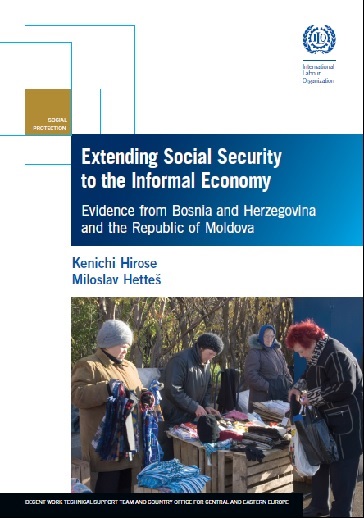 Download:
Every member of society has the right to social security. “Ensuring adequate social security for all” is one of the key goals of the ILO’s Decent Work agenda.

Most European countries have already established comprehensive social security systems. The existing systems typically operate in the forms of contributory social insurance systems and non-contributory, tax-financed social assistance systems, both of which constitute the main pillars of the European social model. Although the existing social security systems in European countries have achieved reasonably high population coverage, gaps still exist, notably among workers in the informal economy, migrant workers and farmers in rural areas.

This report is organized as follows: Section 1 reviews the scope and definition of the informal economy and undeclared work, and analyses the effects of informality on the right to and financing of social security. Sections 2 and 3 present the case studies of Bosnia and Herzegovina and the Republic of Moldova, based on the findings of the ILO missions in 2014 and the ILO survey of Moldovan farmers in 2015. Section 4 summarizes the key observations from the two case studies, and discusses the effective policies for extending social security coverage to workers in the informal economy in the context of Central and Eastern Europe.

Regions and countries covered: Moldova, Republic of, Bosnia and Herzegovina