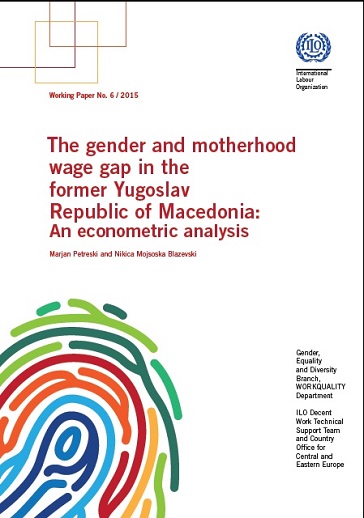 Download:
This report estimates and analyses the gender and motherhood wage gaps in the former Yugoslav Republic of Macedonia. It is based on the methodology developed in the ILO working paper The motherhood pay gap: A review of the issues, theory and international evidence (Grimshaw and Rubery, 2015). The motherhood pay gap measures the pay gap between mothers and non-mothers. It also measures the pay gap between mothers and fathers. This is different from the gender pay gap, which measures the pay gap between all women and men in the workforce (Grimshaw and Rubery, 2015).
The results for the former Yugoslav Republic in Macedonia suggest that women are paid about 18-19 per cent of a men’s wages. Surprisingly, the study finds that mothers (defined as women aged 25-45, with a child aged up to 6 years) were paid equally to non-mothers (or mothers with children older than six) in 2011, and earned 6 per cent more than women without children under the age of six in 2014. The results also suggest that mothers are paid 7.8 per cent less than fathers. Between 2011 and 2014, the gender wage gap only decreased between the lowest-paid jobs held by women and men, suggesting that the introduction of the minimum wage, achieved with the ILO`s support, may have contributed to reducing the gender wage gap.