The impact of the war on income and employment in Ukraine

The Russian Federation’s aggression against Ukraine has resulted in a devastating humanitarian crisis, causing large losses of life, massive destruction of infrastructure, and immense human suffering. As of late September, more than 7.2 million Ukrainian refugees were recorded across Europe, and 6.9 million have had to relocate within the country.

The ILO estimates that employment in 2022 will be 15.5 per cent (2.4 million jobs) below the 2021, pre-conflict, level. This projection is not as high as the ILO’s estimate in April 2022, soon after the conflict began, that 4.8 million jobs would be lost. The positive change is a consequence of the reduction in the number of areas of Ukraine under occupation or with active hostilities. However, this partial labour market recovery is modest and highly fragile.

As the conflict drags on, more Ukrainians could lose their jobs and millions could be pushed into poverty, which could offset the country’s development efforts. 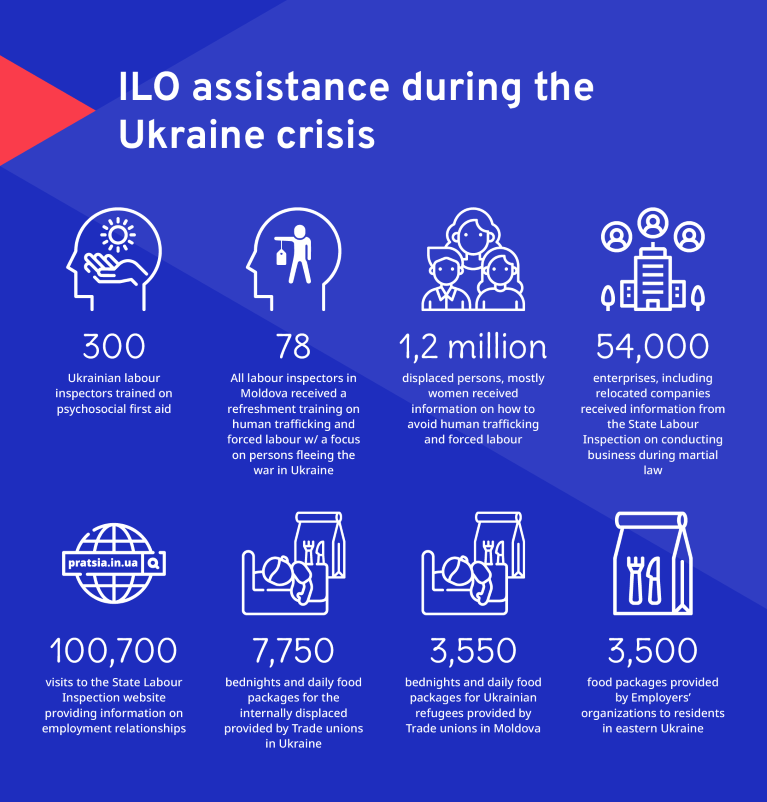 With support from its long-standing partners in Ukraine, the ILO rapidly re-purposed US$1.3 million of its existing funds to deliver humanitarian aid and income support. These funds have allowed the ILO to provide 7,750 bednights for displaced people in Ukraine, and 3,550 bednights for Ukrainian refugees in Moldova. ILO also rapidly trained 300 Ukrainian labour inspectors on psychological first aid and developed an awareness raising campaign on the risks of human trafficking and labour exploitation targeting refugees, most of whom are women. As of late September, this campaign has reached out to 1.2 million displaced Ukrainians. All Moldovan labour inspectors received a refreshment training on human trafficking and forced labour, with a focus on persons fleeing the war i Ukraine. With ILO support, the State Labour Inspection provided 54,000 businesses, including relocated ones with information on conducting business during martial law, and on employment relationships. To date, 100,700 visits were made to the SLI website www.pratsia.in.ua.

Scaling-up support based on needs

While fighting continues, some areas of Ukraine are starting recovery efforts and others far behind the frontlines continue to work and produce. For this reason, the ILO’s work in Ukraine combines the continued delivery of humanitarian aid with economic stabilisation and job preservation interventions, depending on the security situation and needs in the different regions of the country.

At the same time, the ILO is stepping-up support to facilitate the protection and socioeconomic inclusion of refugees in neighbouring countries, particularly in Moldova, in coordination with the Government, UN partners, and local civil society.

by areas of work