The fourth “Decent Work Country Programme” of Ukraine for the 2016 – 2019 period promotes decent work as a key to national development and is based on the previous successful cooperation between the ILO and Ukraine.

The Memorandum of Understanding was signed by the Ukrainian Minister of Social Policy of Ukraine Pavlo Rozenko, the ILO Regional Director for Europe and Central Asia Heinz Koller, Co-chairmen of the National Tripartite Social and Economic Council from national representative employers’ and workers’ organizations respectively Oleksii Miroshnychenko and Grygoriy Osoviy in presence of over 100 representatives of the ILO tripartite constituency, academia, NGO’s, UN, international development partners and media.

The Programme, which was developed with the participation of the Ukrainian government, employers’ organizations and trade unions, focuses on three jointly agreed key priorities: The results and lessons learnt from implementation of the previous Decent Work Country Programme of Ukraine for 2012-2015 and its assessment have also been taken into account.

More and better jobs are needed

Long-standing structural problems of Ukraine, such as weak economic growth and employment creation, wage arrears, high share of informal economy and undeclared work, weak labour market governance and burdensome regulation, were compounded by the new challenges Ukraine now faces following the drastic political changes, the annexation of Crimea and destabilization of the situation in the Donetsk and Luhansk regions.

The country faces serious demographic challenges because of a rapidly aging population, migration, and internal displacement of the population. Rising unemployment throughout Ukraine poses additional constraints for displaced persons to find work in other regions of the country. The most recent estimates point to at least 1.449 million internally displaced population (61.1 per cent are women).

To address these challenges, the first priority is to promote employment and sustainable enterprises for stability and growth. A national assessment of the enabling business environment will be completed in order to help Ukrainian constituents to initiate or adopt legal and institutional reforms promoting the creation and growth of sustainable enterprises. Evidence-based policy reforms will be initiated in the Ukrainian vocational education and training system to offer market relevant skills and address labour market skills mismatch. The ILO will provide technical support to the reform of the Public Employment Service for a more client oriented approach, a diversification of services and a stronger role in providing labour market information. The ILO will also open a policy and technical dialogue with the Ukrainian constituents and with international donors and financial institutions to maximize the job creation impact of new investment programmes in the country.

The second priority seeks to promote effective social dialogue. The ILO will continue to assist the tripartite constituents in the process of legislative reforms as well as strengthening the effectiveness of collective bargaining and coordination in addition to improving the functioning of the National Mediation and Conciliation Service. The ILO will also continue to support employers’ and workers’ organizations enabling them to deliver targeted and useful services to their members and enhancing their advocacy capacities. The labour inspection system will be also strengthened and modernized with the ILO’s support.

Finally, the third priority aims to enhance social protection and conditions of work by strengthening national social protection floors through the implementation of the international labour standards and social dialogue. Wage and income policies will be developed and implemented in order to reduce wage arrears, the gender pay gap as well as for a better adjustment of the minimum wage. The ILO will support Ukraine to update occupational health and safety legislation focusing on high-risk industries and to implement practical occupational health and safety measures at the enterprise level. HIV workplace programmes will be developed and implemented in selected regions or sectors reaching out to at least 10,000 women and men workers and ensuring their access to Voluntary Counselling and Testing on HIV at and through workplace.

The programme will be implemented during a four year period until 2019. The parties confirmed their commitment to cooperate in the programme’s implementation which will be regularly monitored. 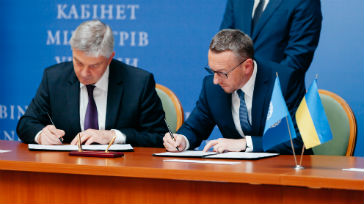