BRUSSELS (ILO News) – A new International Labour Organization report to the World Bank finds that the systematic and systemic use of child labour and forced labour in Uzbekistan’s cotton industry has come to an end.

The report Third-party monitoring of measures against child labour and forced labour during the 2018 cotton harvest in Uzbekistan is based on more than 11,000 unaccompanied and unannounced interviews with a representative sample of the country’s 2.5 million cotton pickers. It shows that the country is making significant reforms on fundamental labour rights in the cotton fields.

The report was presented during a conference in Brussels, which brought together key stakeholders, including the Deputy Prime Minister of Uzbekistan, Mrs Narbaeva, the Minister of Employment of Uzbekistan, Mr Kudbiev, representatives from the ILO, the European Commission, the World Bank, the social partners and independent human rights activists.

Over 93 per cent of those involved in the 2018 cotton harvest were not forced, and the systematic recruitment of students, teachers, doctors and nurses has ended. However, according to the monitors, the recruitment of staff from state institutions, agencies and enterprises still occurs at the local level. Child labour, which was previously a serious problem during harvest time, is no longer a major concern.

“Our country is analyzing the cotton harvest systematically,” said Tanzila Narbaeva, Deputy Prime Minister of Uzbekistan. “Various awareness raising programmes and capacity building initiatives in educational institutions and for local authorities were introduced, and feedback mechanisms have been implemented. We look forward to continue our cooperation with the ILO, the World Bank and civil society to further sustain progress in this area.”

“The 2018 cotton harvest was an important milestone in Uzbekistan’s reform process and successful fight against child labour and forced labour. This effort has encompassed not only government institutions but also journalists and all groups of civil society, including critical voices of individual activists. This is an encouraging sign for the sustainability of these results. However, a minority (6.8 percent) of pickers were still forced to participate in the harvest. This amounts to 170,000 people,” said Heinz Koller, ILO Assistant Director-General and Regional Director for Europe and Central Asia. 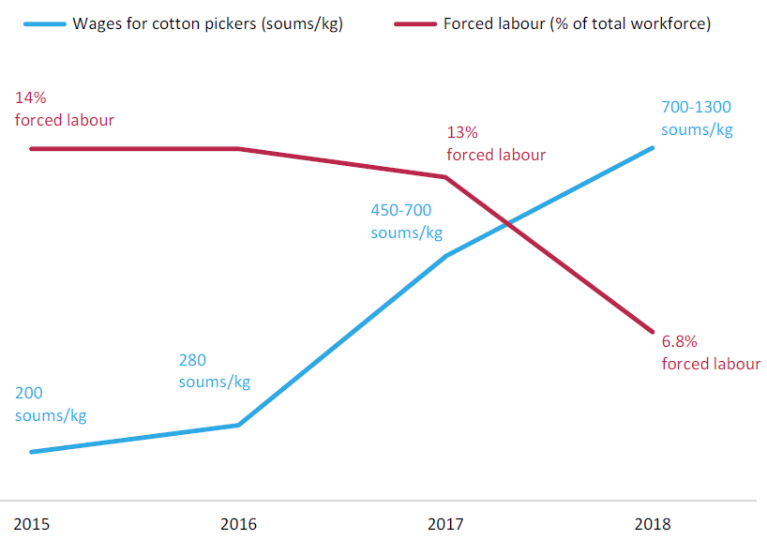 Graph: Trends in wages and percentage of forced labour 2015-2018

Cotton pickers’ wages have been increased in line with recommendations by the ILO and the World Bank. The ILO recommends that the government continues to increase wages and also addresses working conditions more broadly to further attract voluntary pickers.

Interviews carried out by the ILO monitors and local human rights activists took place in all provinces of the country and included cotton pickers and other groups which are directly or indirectly involved in the harvest such as local authorities, communities and personnel of institutions and companies. In addition, a comprehensive telephone survey of over 3,000 randomly selected persons was conducted. Before the harvest, the ILO experts organized training on Fair Recruitment principles for some 7,000 people directly involved with the recruitment of cotton pickers.

The feedback mechanisms operated by the Ministry of Labour and the Federation of Trade Unions received and investigated over 2,500 cases. During the 2018 harvest, 206 officials and managers were sanctioned for forced labour violations, leading to fines, demotions and dismissals.

“My country is really changing. People can feel the difference,” said Azam Farmanov, an independent Human Rights Activist, who was jailed for 11 years and only released at the end of 2017 as part of sweeping reforms under the new President Mirzoyoyev.

“Uzbekistan still has work to do in many areas but the significant progress on child labour and forced labour makes me optimistic that we can also make progress on other issues,” Mr Farmanov, who conducted monitoring with ILO in 2018, added.

The ILO Third-Party Monitoring (TPM) project in Uzbekistan will now focus on the remaining challenges, particularly the need for gradually transferring responsibility for monitoring to the labour inspection, trade unions, local human rights activists and investigative journalists. There will also be focus on enabling responsible foreign investment and trade with the Uzbek garment and textile industry which has the potential to help completely eradicate forced labour while also creating hundreds of thousands of decent jobs for the country.

The monitoring also shows that cotton picking economically empowers women in rural areas. The cotton harvest provides many women with a unique opportunity to earn an extra cash income which they control and can use to improve the situation of their families. On average, each cotton picker participated in the harvest for 21 days, and the wages earned from picking represented 39.9 percent of their personal annual income.

The ILO TPM Project is funded by a multi-donor trust fund with major contributions by the European Union, the United States and Switzerland. 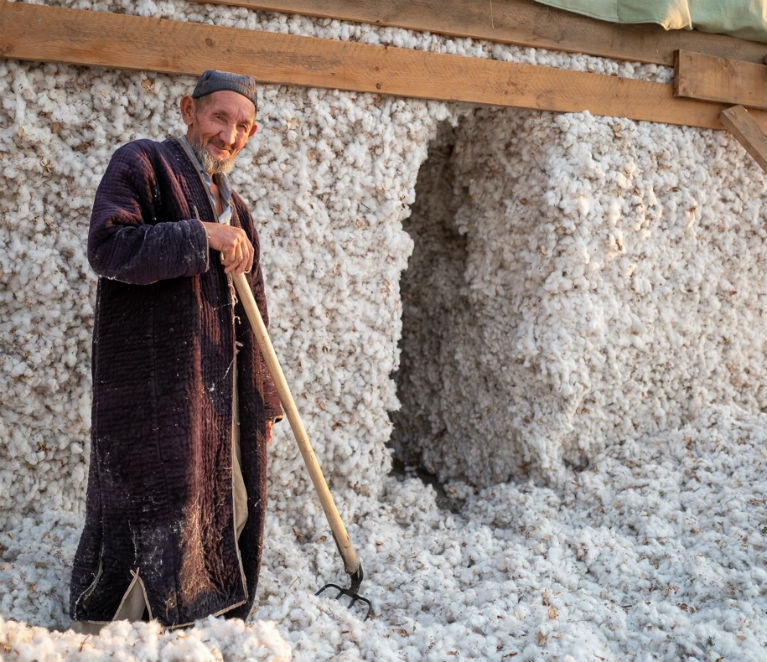