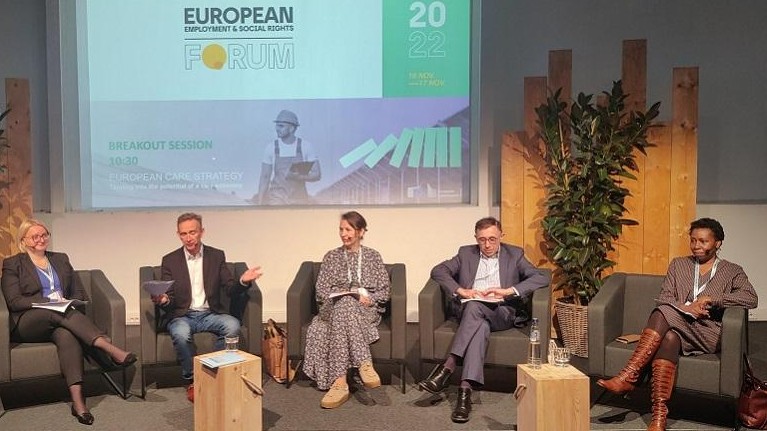 “If we want to advance gender equality, we need to prioritize investing in the care economy, creating quality care jobs and promoting a more balanced sharing of unpaid care work at home and between families and the State through care policies and services,” said Ms King. Women still perform the vast amount of unpaid care and domestic work.

In its ‘Care at work’ report, the ILO calls for investing in a package of transformative care policies, including in care services and the workforce, as well as care leave. This investment could generate a total of 299 million jobs by 2035, and would boost the employment rate of women and reduce gender wage gaps.

“Closing the current policy gaps would require a gross additional annual investment of USD 567 billion in total for the 27 EU countries,” explained Ms King. Such an investment in care would generate additional tax and social security contributions from the jobs created as well as from the increased labour market participation of women. Overall, tax revenue would rise, reducing the total funding requirement of care policy measures in the EU from an annual 3 per cent of GDP (before taxes) to an annual net 2 per cent of GDP (after taxes) by 2030.

“These transformative investments would result in important economic and social benefits. In the EU, 85 per cent of the new jobs created in childcare and long-term care services would go to women and 98 per cent would be in formal employment,” Ms King added.

In concluding, the ILO Chief emphasized that the return on investment in the EU would be considerable. On average, every dollar spent in a care package that extends adequately paid childcare-related leave as well as early childhood care and education services would result in 4.7 dollars of increase in GDP from higher maternal employment and earnings.