On 4 December, the Belgian NGO platforms 11.11.11 and CNCD-11.11.11 organized an event at the Belgian Federal Parliament to raise awareness of their campaign “Social protection for everyone”, which is almost halfway. Mr Ryder participated in the event as a keynote speaker. The ILO shares the ambition to make social protection a reality for everyone around the world and endorses the initiative.

In his address to the delegates at the event, Ryder stressed that it is unacceptable that 73% of the world population does not have adequate social protection. In fact, the lack of social protection is not just an issue for the developing economy, it also affects workers in non-standard forms of employment in industrialized countries. “The gap that currently exists is not acceptable from a human rights perspective, and it is also a missed opportunity from an economic and social development point of view,” he said.

The ILO is building a conducive environment for the extension of social protection in its member states.

“We are convinced that developing strategic partnerships with other UN agencies, the World Bank, the European Union, regional development banks, the IMF, the G20 and the BRICS group can help us achieve greater impact in extending social protection coverage”, Ryder added. He also referred to the Global Business Network for Social Protection Floors, launched last October, which “will help us in the fight for social justice and sustainable development”.

He concluded by praising the organisers of the campaign for their efforts and expressed his wish to maintain and grow the long-standing collaboration in the field of social protection between the ILO and the Belgian government, the social partners and civil society. 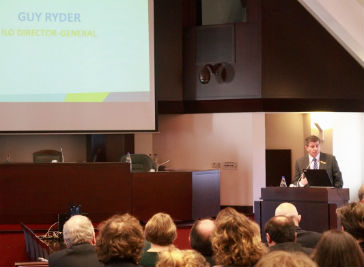