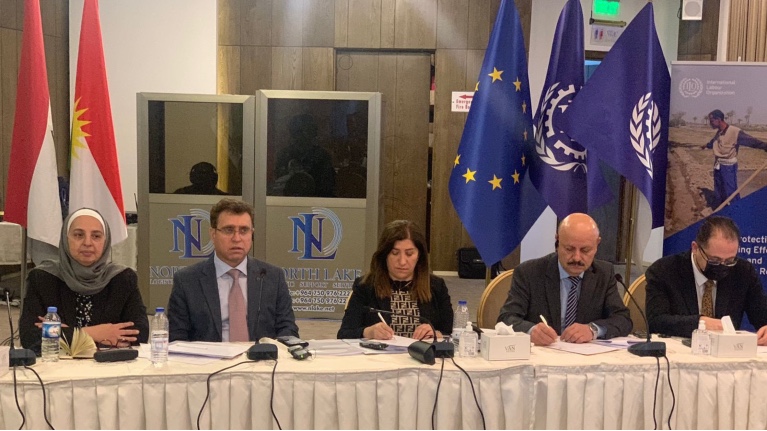 The meeting, which took place in Erbil on February 13-14, brought together 35 representatives from various ministries, including the Deputy Minister of Labour and Social Affairs and the Deputy Minister of Planning. It also included representatives from the Deputy Prime Minister’s office, the Directorate of Labour and Social Insurance, members of parliament, as well as members of the Chambers of Commerce and Industry, the KRI Trade Union, and the Kurdistan Workers Union Confederation.

It follows a series of bilateral technical meetings which were held in recent months between the ILO, the Government and social partners, to discuss key findings of a legal assessment.

“It is important for us, as the Kurdistan Regional Government, to have our own law of pension and social security, in accordance with international standards,” said Zakia Sayed Salih, Deputy Minister of Labour and Social Affairs. “The Ministry requested the International Labour Organization to support the government in this field. There will be joint action with the ILO after this workshop which includes taking notes and feedback of all the participants, in order to have an integrated law that protects the rights of workers in the private sector and is referred to Parliament."

During the event, participants examined recommendations based on ILO’s legal assessment of the draft law, with a focus on five key issues, namely financial sustainability; long-term benefits such as the retirement system; short term benefits including unemployment, maternity coverage and employment injury; the extension of coverage to the self-employed and informal workers; and issues of governance.

The Kurdistan Region of Iraq’s social security scheme for private sector workers is based on the Social Security Law No. 39 of 1971, but with some independent amendments. It is administered by the Ministry of Labour and Social Affairs and covers the risks of old-age, disability and survivorship, health and employment injury. The draft law is intended to replace the current Social Security Law and if passed, the draft law will bring in several changes including achieving a wider coverage of workers in the private, mixed and cooperative economy and also of those active in the informal economy. New features in this draft law include the establishment of unemployment benefits.

The results of the two-day workshop will be reflected in a revised draft of the law. Participants will receive an amended version of the draft law reflecting the consensus reached. The ILO together with the Government of Iraq, including the KRI Government, will work collaboratively to arrive at the best draft laws that maximize the societal outcomes and contribute to the aspiration for an economically productive and socially inclusive country.

“This workshop aimed to discuss the observations of the International Labour Organization on the draft law on pension and social security so that all articles of the law are in conformity with international standards and certified by the International Labour Organization,” said Arif Hito, Director General of Labour and Social Insurance. “Strengthening the draft social security and pension law according to international standards is to guarantee the rights of workers in the private sector."

The workshop is part of broader efforts, supported by the European Union, to reform social protection in the country, being implement by the ILO, UNICEF, WFP and the Government of Iraq.