SANAA (ILO News) – The International Labour Organization and the Federation of Yemen Chambers of Commerce and Industry held a series of three webinars for representatives of Governorate Chambers to share their current concerns and shape a new value proposition, reinvent the business model and look for new alliances to boost resilience and sustainability.

The Federation of Yemen Chambers of Commerce and Industry is the national cross-sectoral body representing private sector interests vi-a-vis the governmental authorities and external stakeholders. Its members are the 21 governorate chambers; companies in Yemen have to be affiliated to governorate chambers within the territory they operate. Despite the conflict and the consequent country fragmentation, the Federation has managed in recent years to maintain close contacts with most governorate chambers, and is an important platform for business leaders to meet and maintain commercial relations across Yemen.

Yemen’s economic and social prospects in 2021 and beyond are uncertain, hinging on the political and security situation. Most recently, the compounded threats of continued conflict, the spread of COVID-19 and environmental issues have pushed the country into an extremely fragile situation. A cessation of violence and hope for political reconciliation and the reintegration of state institutions would improve the operating environment for the private sector, and facilitate the reconstruction of the economy and rebuilding of the country’s social fabric.

“In Yemen there used to be 500,000 industrial establishments. Around 50 per cent stopped their operations or were forced into the informal market. The main problems they face are double taxation, lack of road and port infrastructure, corruption and insecurity,” said Vice Chairman of the Federation Mr Abubaker Salem Baobaid. This sharp decrease in industrial activities has deeply impacted the financial and operational capacities of the chambers, which derive most of their income from membership fees. Many chambers had to lay off up to half of their staff due to their inability to pay salaries. Additionally, a number of chambers buildings were damaged by the war.

“It is essential to give a chance to the Federation and governorate chambers to reactivate and expand their operations. In the past, the chambers played a substantial role in economic and socio development in Yemen,” continued Mr Baobaid. “Relations with the government and, and public-private dialogue in general, is too weak at the moment. The government needs assistance and the private sector is ready to help. The right channels and mechanisms should be established. We should bear in mind that the private sector is an essential asset for the country’s stability.”

A number of international business leaders who have been instrumental in maintaining business networks and promoting peace processes in their own countries shared their experience during the webinars. Mr Suresh de Mel, CEO and Chair of the Sri Lanka Export Development Board, illustrated the role that the private sector played in peacebuilding in Sri Lanka. “Engaging with media, improving visibility and outreach of the private sector within the community and maintaining and even boosting commercial ties across the entire country were some of the key ingredients of the Business for Peace campaign in Sri Lanka,” Mr de Mel explained.

In the closing session, participants discussed short-term priorities to reposition the Federation and the individual chambers and ensure that the private sector would have a central role in the peacebuilding and reconstruction process. Participants identified the top priorities as building a unified database system to accurately assess the number of companies still operating in selected governorates; developing a communication strategy to reconnect external stakeholders with companies; and mapping the most pressing needs of companies in order to design new business development services in Yemen.

“If the chambers can return to the same level of activity they had before the conflict, they will greatly contribute to reconstruction efforts in Yemen and rebuilding its economy. We count on ILO expertise to support us in increasing our representativeness, influence and outreach,” Mr Mohammad Qaflah, Secretary General of the Federation of Yemeni Chambers of Commerce and Industry, said in his closing remarks. 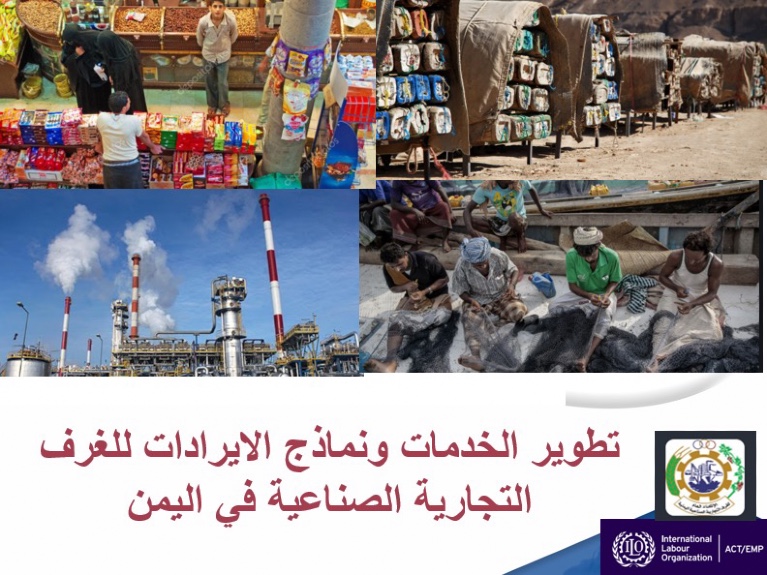