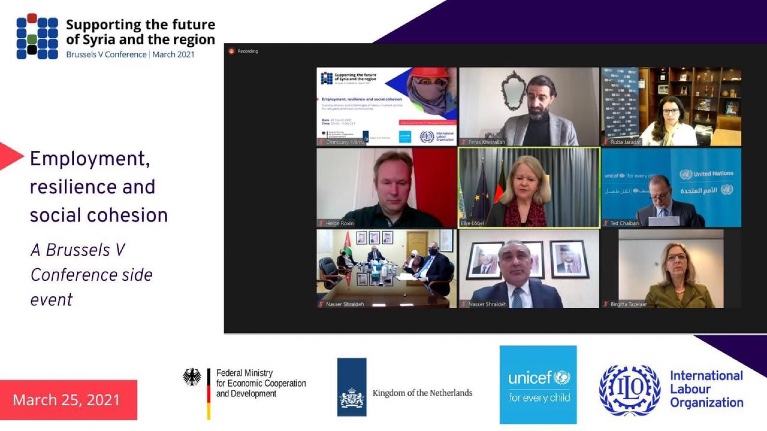 BEIRUT (ILO News) - A virtual event on the sidelines of the EU-hosted Fifth Brussels Conference on “Supporting the future of Syria and the region” highlighted how UN agencies and development partners have helped Syrian refugees and the communities that host them overcome challenges in accessing the labour market, building more resilient and socially cohesive communities in the process.

The side event was hosted by the ILO, Germany’s Federal Ministry for Economic Cooperation and Development (BMZ), the Netherlands Ministry of Foreign Affairs, and UNICEF under the title “Employment, resilience and social cohesion - Success stories and challenges of labour market access for refugees and host communities.”

Panellists and participants explored how the COVID-19 pandemic has impacted job creation measures designed to help refugees and their hosts transition to sustainable employment through tailored education and active labour market policies that contribute to social cohesion in the communities where refugees reside. The measures discussed at the event were implemented by the ILO and UNICEF with funding from the governments of Germany and the Netherlands.

A decade into the conflict, the situation in Syria and the surrounding region remains highly critical. The already existing severe economic, financial, social and humanitarian crises in Syria and in refugee-hosting countries deteriorated further with the spread of COVID-19 and the reduction of economic activity over the past year.

Lebanon Director of the Berghof Foundation Feras Khairallah, who moderated the event, explained how the impact on young people has been particularly dire. “A lack of foundational numeracy literacy skills, as well as transferable skills and labour market-relevant training, means that many young people are now unable to enter into gainful employment. Young workers and women, especially refugees, suffer from increased unemployment, informal employment, and uncertainty regarding their future in the labour market,” Khairallah said.

The event began with a testimony from computer science student Amal Ibrahim from the Kurdistan Region of Iraq. Amal took part in training on Employability, Entrepreneurship, Life Skills and Active Citizenship (EELSAC) provided by ACTED in the framework of a project funded by UNICEF in Dohuk in the Kurdistan Region of Iraq. Amal’s dream is to enter the world of technology and start her first business in this field. She is set to receive additional entrepreneurship training from the ILO and UNICEF, within the framework of the “Partnership to improve prospects for forcibly displaced persons and host communities in Iraq” (PROSPECTS), funded by the Government of the Netherlands.

Amal Ibrahim said of her EELSAC training: “I learned how to set goals and manage my time, and I learned about job interviews, writing a CV, looking for job opportunities and applying for jobs online, this improved my attitude towards teamwork and respect for diversity, and encouraged me to take responsibility for my future professional life. I also became familiarized with my rights as an employee and I took a journey into employer’s mind-set thought real-life scenarios that could occurred in a real workplace.”

Ali Fawaz, a Masters student in social work and immigration studies and a Syrian refugee living in Jordan, spoke of his experience working mainly in the field of data entry with the ILO’s Employment Intensive Infrastructure Programme (EIIP) in Jordan, funded by the Government of Germany through the KfW Development Bank.

Fawaz said his work with EIIP programme contributed to his personal and professional development.

“Professionally, I learned new skills at work, in computer science and other fields, and I also used my English skills to support the municipality where I helped with things like writing official letters. Financially, the work paid well, and with the outbreak of the COVID-19 Pandemic, when work was disrupted, I continued to receive a salary, which was a great help to me. The work also had a positive impact on my mental well-being, because it helped me meet people and socialise and interact with others professionally,” Fawaz explained.

The event then turned to a discussion with panellists representing various programmes and institutions working to respond to the crisis and provide what is needed to enable refugees and host communities to have a better future in times of conflict and crisis.

“Ten years into the Syria crisis, the situation for refugees and host communities is extremely tense and challenging,” said Elke Löbel, Deputy Director General and Commissioner for Refugee Policy at BMZ. “we need to scale up our efforts. This is why we have established partnerships with ILO and UNICEF, not only in order to multiply the impact of our work, but especially with regard to linking short-term employment generation to more structural approaches,” Löbel continued.

“The Netherlands hopes to further strengthen the culture shift towards joined-up planning and programming between the UN and IFIs,” said Birgitta Tazelaar, Deputy Director General International Cooperation at the Netherlands Ministry of Foreign Affairs. “Such a shift puts the affected people and their needs first, above individual institutional interest,” Tazelaar explained.

“It is vital to invest in longer-term solutions to the creation of resilience, recovery and peace through decent work opportunities for refuges and host communities,” said Ruba Jaradat, the ILO’s Regional Director for the Arab States. “It is crucial to support job creation and to shift from the common cash based approach to sustainable job placement and systematic public works. Partnerships play a crucial role in this regard. The ILO would not have been able to promote decent work for Syrian refugees and host communities without the generous support of our development partners, and here I extend special thanks to the governments of Germany and the Netherlands. Fostering social cohesion is also key, especially with the mounting pressure on local economies in the region and on the capacities of governments to mitigate the impact of the pandemic. Working jointly with refugees and host communities can and does serve to reduce tensions and mistrust,” Jaradat said.

“Young people including young refugees are now facing an acute learning and employment crisis. Millions of children are either out of school or are at risk of dropping out, and the region was already home to the highest youth unemployment rates in the world before COVID-19,” said Ted Chaiban, UNICEF Regional Director for the Middle East and North Africa. “Partnerships are absolutely critical to find multi-sectoral, systematic and at scale solutions to help young people, especially those affected by the Syria crisis, transit to employment.”

Ahmet Serdar Yagmur, project coordinator of the Transition to Formality Programme (KIGEP) at Turkey’s Social Security Institution (SSI), said the programme is a showcase of the close collaboration between the SSI and the ILO Office for Turkey. “We provided administrative and financial support for employers to apply for work permits for their Syrian employees and to cover social security contributions for both Syrian and Turkish employees. So far, we have supported over 10,000 employees to access formal jobs and social protection. Aside from its positive economic impact, the Programme contributed to increasing social cohesion between Syrian and Turkish workers,” Yagmur explained.

Jordan’s Minister of Planning Nasser Shraideh highlighted how the COVID-19 pandemic has placed additional pressures on the government and on Jordanians as well as on Syrian refugees residing in Jordan, causing severe wage cuts, job losses and skills deficits. He said international support was more important now than ever to help countries hosting refugees overcome these challenges.

“The Government of Jordan has adopted many progressive policies regarding Syrian refugees, be it in relation to work permits, flexible movement across industries and sectors, accommodating the inclusion of new professions to Syrian refugees as well as granting Syrians the legal opening of home-based businesses,” said Minister Nasser Shraideh. “All this will not be sufficient, however, without a real recovery of the economy, and a different type of support that includes multiyear funding commitments to better and more effectively plan and navigate the situation on the ground.”

Panellists and participants also heard the testimony of Ammar Alkar, a computer science student and Syrian refugee living in Turkey, where he also works for a food production company. Alkar is a beneficiary of the Transition to Formality Programme (KIGEP), funded by the Government of Germany through the KfW Development Bank and by the U.S Department of State, Bureau of Population, Refugees and Migration (USBPRM).

“Thanks to the support of KIGEP, we retained our employees and avoided laying them off during the COVID-19 pandemic. Despite the difficult times, our business even grew and we are now thinking to expand and diversify our products. The assistance we received through KIGEP was and is very encouraging,” Alkar said.

Interventions from the floor were given by Senior Evaluator at the German Institute for Development Evaluation Helge Roxin, and from Director of UNRWA Affairs in Jordan Marta Lorenzo.