The German Government has been supporting the KfW/ILO project “Employment through Labour Intensive Infrastructure“ in Jordan since 2016. Today, the German Ambassador to Jordan, H.E. Birgitta Siefker-Eberle, and ILO Deputy Regional Director for the Arab States, Mr. Frank Hagemann, officially launched the third and fourth phases of the project. The launching ceremony was attended by KfW Country Director, Mr. Christian Schaub, and a large number of high-level representatives from the Jordanian Government, including the Minister of Public Works and Housing, H.E. Falah Al-Omosh, the Secretary General of the Ministry of Local Administration, H.E. Bilal Al Momani on behalf of the Minister H.E. Walid Masri and the Minister of Labour, H.E. Nidal Bataineh.

The German Development Bank (KfW) has been financing the Employment Intensive Infrastructure Programme in Jordan since 2016 on behalf of the German Government. With the new phases III and IV, additional grant funds of EUR 25 million will be added to the previous contributions totalling EUR 20 million. The activities of the new project phases, which officially started on Tuesday, are implemented by ILO in close collaboration with the Ministry of Public Works and Housing and the Ministry of Local Administration.

The main focus of this labour-intensive project is to improve livelihoods through providing cash-for-work opportunities for both vulnerable Jordanian citizens as well as Syrian refugees, targeting 50 per cent Jordanians and 50 per cent Syrians. At the same time, the project improves infrastructure focusing on maintenance and cleaning of roads and highways as well as municipal works. The project will cover 14 municipalities across six governorates in host communities in the north of Jordan.

H.E. Birgitta Siefker-Eberle acknowledged the long-standing and strong partnership with Jordan and stated: “In 2019, Germany and Jordan are celebrating 60 years of development cooperation. Since 2012, the German Government is supporting the Government of Jordan in dealing with the enormous challenges related to the influx of Syrian refugees. The project we are launching today is financed from grant funds of the so-called “employment initiative”, which specifically focuses on fast track modalities, such as Cash for Work, to provide short-term employment opportunities for vulnerable Jordanians and Syrian Refugees in Jordan”. She recalled that Germany has firmly established itself as second-largest bilateral donor to Jordan with more than half a billion Euros of annual support.

Mr. Frank Hagemann emphasised the importance of the partnership between the ILO, Jordan and Germany. “It is vital that we continue to work together to provide decent work and secure livelihoods and dignity for all in Jordan,” he said, adding: “The project focuses on improving infrastructure through the use of labour intensive methods. It provides decent work opportunities to some of the country’s most vulnerable groups, and ensures that Jordanians and Syrians – including women and persons with disabilities – all equally benefit from its interventions.”

Hagemann explained that in the first two phases of the project, over 8,000 persons were supported through employment opportunities in the Governorates of Irbid and Mafraq, and it is anticipated that an additional 10,000 jobs will be created by September 2020 through the third and fourth phases of the project.
– Ends –

KfW finances investments and advisory services on behalf of the German Government. Besides the support for Cash for Work programmes, which amounts to EUR 55 million since 2016 in partnership with ILO and UNOPS, the ongoing project portfolio with a main focus on education, employment promotion as well as water and sanitation in Jordan amounts to about 1.2 billion EUR.

More information on KfW Development Bank is available at: www.kfw-entwicklungsbank.de/International-financing/KfW-Entwicklungsbank/

More information on the ILO’s Employment-Intensive Investment Programme activities in Jordan is available at:
https://www.ilo.org/global/topics/employment-intensive-investment/countries/WCMS_543582/lang--en/index.htm 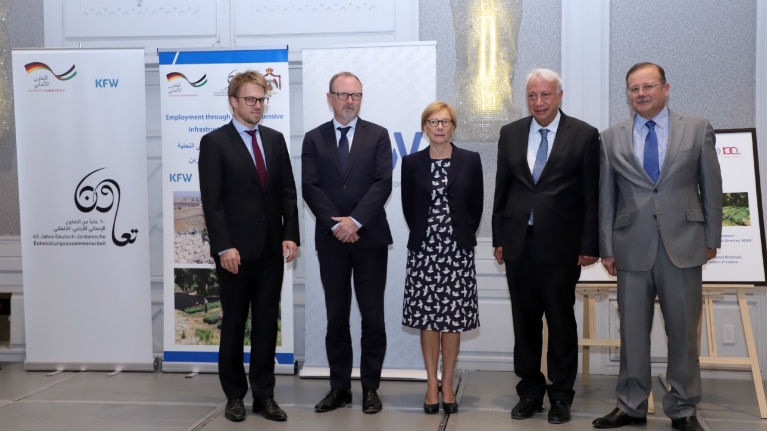