AMMAN, Jordan (ILO News) The 11th Better Work Jordan Annual Stakeholders’ Forum affirmed the need for greater focus on measures to improve the working and living conditions of the sector’s workers, and find paths to advance Jordan’s industrial sector and its global competitiveness.

“We have come a long way in the past 10 years,” said the Director of Inspectorate at the Ministry of Labour Mr. Adnan Rababah in his opening speech, referring to the successful steps accomplished so far to achieve a consistent approach to labour inspection at the Ministry. He added “It was with the support of Better Work Jordan and our strategic partners that we were able to reach a satisfying level of the implementation of the Jordanian Labour Law and Labour Standards in line with the labour inspection reform project launched in 2006”.

Talks this year centred on partnership and collaboration. "Collaboration is the driving force for change," H.E. the EU Ambassador Andrea Matteo Fontana underlined. "We are proud to support Better Work Jordan and its efforts to lead the discussion between the private and public sectors. After operating in Jordan for 10 years Better Work has gathered enough evidence to demonstrate that collaboration is the key to unlock change in practices and attitudes in the garment sector and beyond."

Jordan’s billion-dollar garment sector is one of the country’s main exporting sectors and has immense potential for growth and employment generation particularly in satellite units in rural areas across Jordan. In 2018, Jordan’s Garments and related exports exceeded US$ 1.7 billion and accounted for about 25 per cent of the country’s total exports.

“The ‘Made in Jordan’ label means something: It means quality, it means reliability, and it means a stable supply chain. Jordan offers a young, educated, and tech-savvy workforce -- a perfect match for the garment industry of the 21st century. You’ll find no better partner than Jordan,” said the Acting Deputy Chief of the US Mission to Amman H.E. Mr. John Kowalski complementing the thriving industry during his speech at the forum.

With the support of Better Work Jordan, the garment sector has reached several major milestones in recent years. In 2019, the industry witnessed the application of zero recruitment fees; prohibition of pregnancy tests for migrant workers as part of the recruiting process; the promotion of female empowerment; creation of new employment opportunities and the implementation of the programme’s Gender strategy for the years 2019-2022.

During the forum, delegates discussed the current economic situation in Jordan, the need to address workers’ wellbeing among employers and other relevant stakeholders, and how to sustain the impact of Better Work Jordan in the garments industry.

The forum concluded with the Buyers’ statement presented this year by Mrs Karin Reimerink - Corporate Responsibility Director for Europe, Middle East and Africa (EMEA) at PVH, lauding all joint efforts that successfully led to the application of zero recruitment fees and prohibition of pregnancy tests for migrant workers as of early 2019, and expressing the Buyers’ interest in the continuation of the conversation around mental health and regulating dorm’s inspection.

Notably, this year’s forum coincides with the celebration of the 100th anniversary of ILO globally and a successful decade of Better Work Jordan operating in the country. Jordan has a long history of collaboration with the ILO. It has strived, through the common commitments of the Government, workers' and employers' organisations, to promote decent work, social justice and equity.

Better Work Jordan is part of the joint ILO-International Finance Corporation global Better Work programme which aims to improve working conditions and promote competitiveness in Jordan’s apparel industry. Currently, 90 factories - which employ over 95% per cent of the sector’s 70,000- strong labour force participate in the programme. 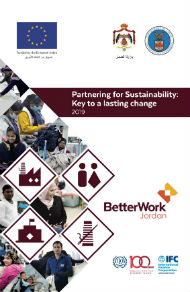