Ramtha, Jordan (ILO News) Representatives from the ILO and the Kingdom of the Netherlands visited a makeshift camp in the northern city of Ramtha to examine some of the interventions that are being implemented under an ILO project aimed at improving working and living conditions for workers in the agricultural sector.

The camp is home to 36 Syrian refugee families, the majority of whom are employed at a nearby farm. Representatives met with refugees and farmers to hear first-hand some of the challenges being faced and ways to address them.

The farm is one of 31 farms being assisted through an ILO project, which is being funded by the Netherlands. The project seeks to advance decent work and the status of agriculture workers – Jordanian, refugee and migrant workers - through a compliance model that strengthens productivity, national labour legislation and adheres to international labour standards.

Recent studies and assessments carried out by the ILO have identified persistent deficits in decent work and employment conditions for workers in Jordan’s agricultural sector, where a large number of migrant workers and Syrian refugees are employed. These include a lack of wage protection, lack of written contracts, an absence of social security coverage for workers, and poor occupational safety and health measures. Child labour is an ongoing challenge in the sector, for both workers and employers and lack of nearby schools and transportation are the main reasons for children not attending school.

“This farm is one of the farms where the compliance model will be implemented to improve working conditions for workers,” said Maha Kataa, ILO Regional Resilience and Crisis Response Specialist. “It will address decent work deficits found in the sector, such as child labour, lack of provisions that specify a minimum wage, social security enrolment or working hours, as well as substandard accommodation.”

The project will also support agricultural workers through skills training and development opportunities, awareness raising and farm level interventions to improve work force productivity. It will support refugees with work permit applications, as well as other employment-related services available through ILO employment centres, which has been set up in different cities to support job-seekers and workers. A model for the inclusion of agricultural workers under the national Social Security Corporation will be developed and piloted under the project.

“It is very good to be able to visit one of the farms that the ILO is working with, to be able to speak to the people who work at the farm, to be able to speak to farmers themselves and to hear about how they organise their business and also to hear about what concerns people have about the way they work,” said Camilla Veerman, First Secretary in charge of Economic Affairs at the Embassy of the Kingdom of the Netherlands. “It is also good to see that there are work opportunities in the sector and that we can help to improve the conditions that people work in.”

One of the visit’s main focuses was the need to improve housing and accommodation for the workers and their families.

A recent ILO survey which examined the housing conditions in the 31 farms, with a total of 503 house-holds, found that the majority of surveyed households were living in structures classified as tents, lacking windows, adequate ventilation and sufficient lighting. As many as 77.9 per cent of surveyed households were found to have deteriorating infrastructure, placing residents at risk of sickness or injury from drafts, flooding and in the worst cases building collapse. The large majority of households lacked basic sanitation, including showers, toilets, sewage and rubbish disposal systems.

The project will seek to improve living conditions on targeted farms through enhancing water, electricity and sewage services, improving general maintenance of tents, providing households with basic furniture, as well as equipping areas with caravans for public use.
The project is part of a broader partnership between the ILO and the Netherlands that supports refugees and their host communities in the Horn of Africa and the Middle East, including Jordan. It focuses on the creation of jobs and livelihoods so that refugees can contribute to their new communities and prepare for a possible return to their countries of origin once that becomes possible. It also seeks to strengthen the resilience of the countries and communities that continue to offer their support to refugees. 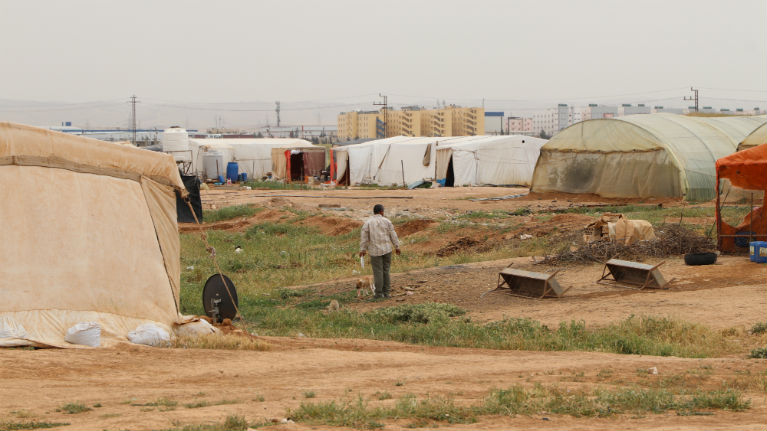