Amman, Jordan (ILO News) Government, employers’ and workers’ representatives from across Lebanon, Iraq, Jordan and Turkey have come together in Jordan to exchange views and experiences on achievements made and challenges faced in addressing the employment and livelihoods needs of Syrian refugees and members of their host countries in the region.

Organised by the ILO, the visit included a number of tours to sites and interventions in the Jordanian cities of Amman, Irbid, Jerash, Madaba and Mafraq, which are supporting refugees and host communities in accessing decent work in the country.

The study tour is part of a South-South and Triangular Cooperation (SSTC) initiative between the four countries, aimed at exchanging knowledge, skills, resources and technical know-how. It follows a similar study tour which was held in Turkey earlier this year, covering employment interventions in Ankara and Gaziantep.

A two-day inter-regional dialogue workshop between the four countries – the last of a series of SSTC activities - took place following the two field visits in Turkey and Jordan. The workshop gave participants the opportunity to hear about different country experiences and compare achievements and lessons learned with their own practices, placing emphasis on the ILO Refugee Response Programme in Turkey, and in Lebanon and Jordan.

"In the context of the Syrian refugee crisis, and within a broader UN response, the ILO has sought to preserve social and economic stability and build resilience in the countries hosting Syrian refugees, while paving the way for longer term development based on decent work principles," ILO Deputy Regional Director for Arab States Frank Hagemann told constituents at the workshop in Amman.

“This workshop is an opportunity for experts from Turkey, Iraq, Lebanon and Jordan to exchange views and experiences on procedures taken in their respective countries to address the Syrian refugee situation,” Secretary General of Jordan’s Ministry of Labour Ziad Obeidat told the ILO. “Jordan has been working with the international community on the Response Plan to the Syria Crisis, creating a true partnership with these sides in order to address the needs of both Jordanians and Syrian refugees.”

The study tour in Jordan allowed participants to examine how labour initiatives are supporting Jordanian and Syrian men and women.

Participants held discussions with representatives of the General Federation of Jordanian Trade Unions, which is supporting Syrian workers employed in construction to obtain flexible work permits. They also met with agricultural cooperatives, which have taken similar steps in helping Syrian farmers obtain work permits, improving their access to the formal labour market. A key highlight was a visit to a mobile work permit centre, set up by the Ministry of Labour with the support of the ILO, bringing work permit services closer to the workers themselves.

Delegates visited a vocational training centre working with the ILO to support Syrian refugees and Jordanians to find better employment through its Recognition of Prior Learning (RPL) programme. The programme assesses and formally recognises the skills and expertise that a person has gained while working, often in the informal economy.

“Refugees leave their countries under extraordinary situations, such as civil war,” said Recep Atar, a representative of the HAK-IS Trade Union Confederation in Turkey. “Therefore, many refugees do not have any supporting documents (certifications with them), yet those documents are required to prove which skills they have and at what level. In this sense, host countries should focus on recognition of prior learning….in order to enable refugees to prove their skills, knowledge and capabilities.”

They also visited factories in various cities and a productive kitchen, which has been set up as a joint venture between Syrians and Jordanians. They met workers benefitting from various interventions under the ILO’s Programme of Support to the Jordan Compact, which supports economic growth, job creation and quality service delivery in the country.

“Today, we had the opportunity to meet factory workers and ask them questions about their work here at the factory,” said Jinane Chaaban, Advisor to the Minister of Education and Higher Education in Lebanon. “One worker told us that he has been working at this factory for two months. The ILO supported him in getting this job and in taking part in a training programme to ensure that he is trained to use machinery and equipment in a safe and secure way... This is something we would like to see more of in Lebanon. Factories are in need of more training programmes for workers on the use of machinery and other aspects.”

Representatives visited ILO-supported employment centres in Madaba and Irbid, which are part of a series of centres set up across the country to connect Jordanian and Syrian job seekers with employers, through career guidance, training opportunities and job matching services.

Delegated highlighted the need to enhance women’s economic participation in the labour – of both refugees and members of the host countries – through gender-sensitive initiatives which address their needs. They also pointed out that while it was extremely beneficial to learn from the Jordan experience, the socio-economic and labour market situations vary between the four countries.

“The situation in Iraq is different because in addition to Syrian refugees, we also have 2.5 million internally displaced Iraqis,” said Maherah Kassim Shaalan, from the Iraqi Federation of Industries. “(In Iraq) I believe more international programmes are needed to help organise refugees’ employment in the country’s labour market, but which also address the unemployment situation of Iraqis.” 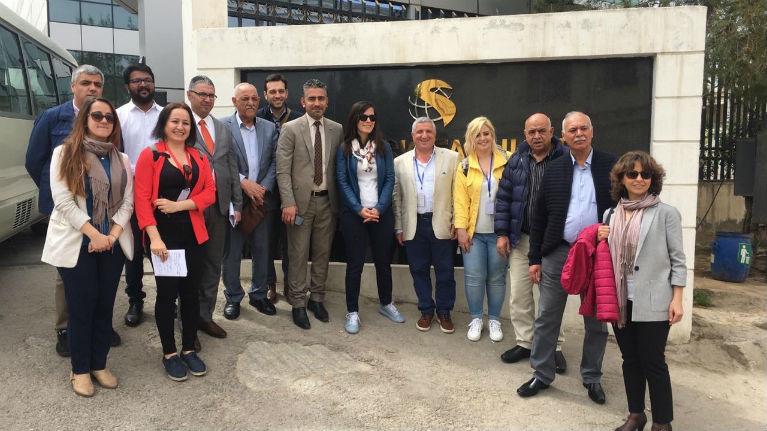 Promoting a decent work approach to crisis response and recovery: A South-South and Triangular Cooperation (SSTC) initiative between Lebanon, Jordan, Turkey and Iraq

Constituents from Jordan, Lebanon, Iraq and Turkey came together in Turkey to discuss the promotion of decent work for refugees and host communities