Beirut Lebanon (ILO News) – A new network of agricultural roads has created infrastructure jobs for the community, and will serve farmers in Lebanon’s northern Akkar region.

The rehabilitation and building of the road network is part of the International Labour Organization (ILO)’s Employment Intensive Infrastructure Programme in Lebanon (EIIP). Since January, a dedicated project has worked to build and rehabilitate agricultural roads in the vicinity of the town of Tal Abbas, while at the same time creating short-term jobs for both the local population as well as Syrian refugees in the area.

An inauguration ceremony to mark the achievement took place at the Tal Abbas Municipality, attracting a wide range of attendees including local officials and stakeholders, the German ambassador to Lebanon, representatives of the ministers of both Labour and Social Affairs, and officials from the ILO and the United Nations Development Programme (UNDP).

“Today is a day that will go down in Tal Abbas’s History as a day of achievement,” stated the Mayor of the town Walid Mitri, adding that the roads will help farmers transport their crops to the market.

The ILO’s Deputy Regional Director for Arab States Frank Hagemann emphasized the importance of the partnership between the ILO, the Ministry of Labour, the Ministry of Social Affairs and UNDP. “It is our duty to work together to provide decent work, secure livelihoods, dignity, and hope to all in Lebanon,” he said.

EIIP in Lebanon is funded by the German Government through KfW.

During his first visit to the North of Lebanon, the newly appointed German Ambassador Dr. Georg Birgelen said that during his first two hours in the Tal Abbas area, he was delighted to hear about the success of the agricultural roads project in improving the living and working conditions of the local population as well as the refugees present in the area.

UNDP’s Local and Social Programme Manager at Raghed Assi said the road network would increase productivity for the agricultural lands in Akkar and increase income for farmers.

Zahi El Haibi, representating the Minister of Social Affairs, thanked the German Government and people for their generous funding for EIIP in Lebanon.

“This support to Lebanon takes place at three levels: supporting the displaced population, supporting the host country through sustainable development, and supporting programmes like EIIP that respond to the local needs.”

EIIP in Lebanon uses the Local Resource Based Technology methodology throughout its implementation. This method emphasizes the use of labour and limits the use of machinery, with the goal of creating employment in the area where the infrastructure work takes place.

Rabih Kabbara, representating the Minister of Labour, said the methodology builds the capacity of the local population involved in such programmes, while at the same time providing them with decent work conditions in the workplace.

Under the project, five kilometers of roadswere built and rehabilitated in Tal Abbas, creating a total of 8500 Worker Days and employing more than 160 Lebanese and Syrian workers. 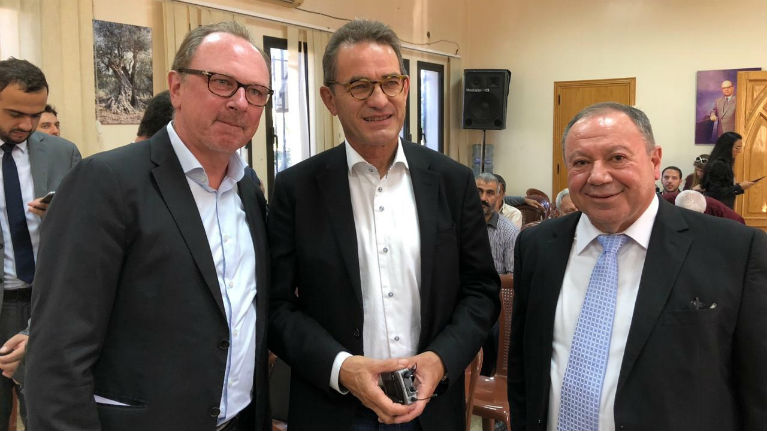