BEIRUT and HELSINKI (ILO News and UN agencies) – The Government of Finland brought together key humanitarian and development stakeholders on 23 and 24 January in Helsinki to discuss the response to the protracted crisis in Syria and neighbouring countries, now into its sixth year.

The ILO Regional Director for Arab States Ruba Jaradat represented the ILO at the Helsinki Conference on Supporting Syrians and the Region, at which the United Nations and partners appealed for $4.63 billion to help people inside Syria, those who fled and the communities hosting them.

Jaradat said it was vital that the response to the crisis includes a development-based approach to enhance access to employment opportunities and livelihoods.

“The international community has realised that a humanitarian response alone is not enough to lift Syrian refugees, as well as communities in refugee-hosting nations, out of situations of fragility and vulnerability,” said Jaradat, who took part in a high-level panel on Vulnerabilities, Jobs and Economic Opportunities on 24 January.

“It is now clear that alongside the humanitarian approach, we must also adopt a development-based approach, which generates job-rich and inclusive economic growth. Refugees and host communities need jobs – not any jobs, but decent jobs that will build their resilience, restore and improve their livelihoods, and guarantee them a productive and meaningful future,” Jaradat continued.


Refugees and host communities need decent jobs that will build their resilience and guarantee them a productive and meaningful future."

The conference focused on key humanitarian priorities inside Syria, where over 13.5 million people are in urgent need of humanitarian assistance; strengthening protection for the more than 4.8 million refugees from Syria now in neighbouring countries; and building resilience inside Syria as well as for the more than 4.4 million vulnerable people in neighbouring countries.

This video highlights some of the ILO's recent work in supporting Syrian refugees and host communities in Jordan.

In the countries which host the most Syrian refugees globally, the ILO is working in Turkey, Lebanon and Jordan to build the resilience of host communities and refuges by enhancing access to employment opportunities and livelihoods. It is strengthening institutional capacities and coordination to eliminate child labour, and supporting policy development to ensure an employment rich national response to the crisis. 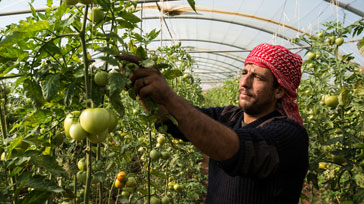