AMMAN, Jordan (ILO News) – The United States Department of Labor (US DOL) removed garments produced in Jordan from its 2016 Trafficking Victims Protection Reauthorization Act (TVPRA) list, as “the incidence of forced labor in the production of garments in Jordan has been significantly reduced,” a US DOL report read.

“While there are still some indicators of forced labour present in the sector, their incidence is isolated and consistent with the standard articulated in the Procedural Guidelines, the evidence no longer supports inclusion of garments from Jordan in the TVPRA List,” read the seventh edition of the List of Goods Produced by Child Labor or Forced Labor, issued on September 30, 2016.

“The removal of this good from the list is a result of targeted action,” according to the report, “which included the collection and reporting of credible information, the investment of significant resources on the part of the Government of Jordan, the USG, the International Labor Organization (ILO), international garment buyers that source garments from Jordan, the Jordanian garment industry association, and the General Trade Union of Workers in Textile, Garment & Clothing Industries (GTUWTGCI).”

“Working together, these actors have achieved a significant reduction in the incidence of forced labor in the sector,” the report continued.

The US DOL report said that “one of the Jordanian government’s most significant steps to combat forced labour in the garment industry has been to collaborate with the ILO on the BWJ program, which was launched in 2008 with funding from the USG and from participating garment buyers.”

The ILO’s Better Work Jordan (BWJ) Programme Manager Tareq Abu Qaoud said: “BWJ is very pleased to see the sector reach this point, and is proud to have contributed in efforts to reach this milestone. In 2006, the challenging working conditions had a huge impact on the sector’s growth, and the country’s reputation at large. Despite the difficult situation back then, the stakeholders have turned problems into opportunities to increase the level of compliance."

But US DOL warned that to guarantee further improvement, it will be important to ensure that advances continue.

“This is particularly important in light of the sector’s expected expansion, as the Government of Jordan begins to integrate Syrian refugees into the legal labour market and the sector takes advantage of expected new investments,” the report read.

US DOL says the TVPRA list is primarily meant to raise public awareness about forced labour and child labour around the world and to promote efforts to combat them, as well as serve as a catalyst for more strategic and focused coordination among those working to address these problems. 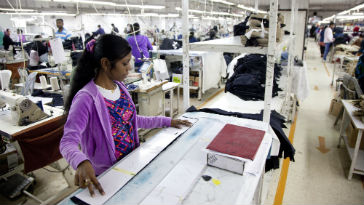