Amman, Jordan (ILO News) The ILO Office for Arab States lauded the Government of Jordan for its announcement that it would enforce measures to protect the rights of private school teachers in Jordan.

The new measures will ensure that private schools will pay teachers salaries and social security benefits throughout the entire calendar year with no interruptions during the summer holiday months. The announcement was made by the Deputy Prime Minister and Minister of Education Dr. Mohammad Thneibat, and the Director General of the Social Security Corporation Nadia Al Rawbdeh.

The ILO said the measures will prove an important step towards addressing wage discrimination faced by thousands of private school teachers, who are forced to resign during the summer break and are re-hired at the beginning of the school year.

“The ILO welcomes the decision made by the Government of Jordan and Social Security Corporation. It is now necessary to put in place a monitoring plan that ensures that all private school teachers benefit from this improvement in their working conditions,” said Emanuela Pozzan, the ILO’s Senior Specialist on Gender Equality for Arab States.

The decision follows years of lobbying by the National Committee on Pay Equity (NCPE,) which was created in 2011 with the support of the ILO, the Ministry of Labour, the Jordanian National Commission for Women (JNCW), civil society groups, parliamentarians and journalists in order to tackle the issue of pay discrimination in Jordan’s private schools.

A campaign titled "Stand up with Teachers" was launched in mid 2015 to empower teachers to negotiate for fair remuneration and better working conditions. Its calls on teachers and employers to sign the Collective Contract, drafted and agreed upon as a result of collective bargaining between the Union of Workers in Private Education and Owners of Private Schools Association in November 2014.

The Collective Contract will help ensure that teachers are paid their monthly salaries during the summer holiday, granted annual leave and receive the minimum wage, among other rights. 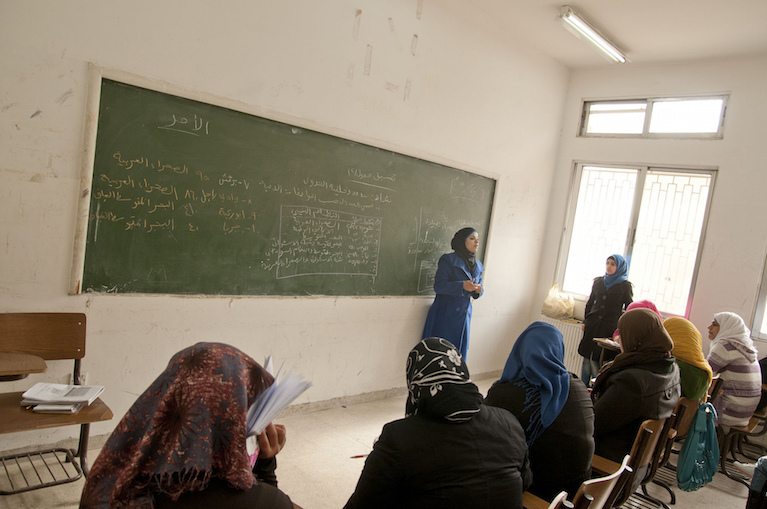 Fair wages and childcare: promoting dignity and equality by empowering workers in the private sector in Jordan
Skip to top