The “validation roundtable” workshop, held on December 14-15, discussed the findings of the comprehensive ILO study titled “Cooperating out of isolation: the case of migrant domestic workers in Lebanon, Jordan and Kuwait.” Produced as part of the “Regional Advocacy Strategy on ILO’s Domestic Workers C. 189 Action in the Middle East”, the study is an attempt to map the current legislative and policy frameworks, institutional structures and membership-based initiatives that can provide domestic workers with the space to economically organize in the Middle East.

“By coming together in cooperatives, migrant domestic workers can work together to achieve decent working conditions and fair levels of remuneration as well as access to services, training and better job opportunities,” said Emanuela Pozzan, Senior Gender Equality Specialist at the ILO’s Regional Office for Arab States.

“Cooperatives established by domestic workers, with support from trade unions or NGOs, have been successful in countries from the US and Spain, to Hong Kong and the Philippines, but can we do it in the Arab States?” Pozzan said.

The estimated two million non-Arab migrant domestic workers in the Middle East are bound by the Kafala sponsorship system, which ties migrant workers to individual sponsors and regulates their residency and employment. The workers are excluded from the labour codes of most countries they work in and are often stripped of social rights and access to decent work. For many, exploitation and abuse are a bleak reality.

Despite recent attempts and progress of some countries in the region to better understand the principles enshrined in the ILO Domestic Workers Convention 189 (2011), many ‘live-in’ domestic workers still face isolation and limited freedom of movement, which hinders their ability to organize collectively. Despite the existence of informal networks and community-based initiatives, at times led by religious institutions, the level of formal organization of migrant domestic workers continues to be limited, and their voices remain largely unheard.

“Jordanian unions for example, don’t represent domestic workers, so having cooperatives would offer a solution, by creating an umbrella for domestic workers to gather under,” said Linda Al-Kalash, executive director of Tamkeen for Legal Aid in Jordan. “While workers would not be able to demand rights as they would under a union, creating a cooperative would still represent a positive step forward for the rights of domestic workers.”

A cooperative is defined by both the International Cooperative Alliance and the International Labour Organization as “an autonomous association of persons united voluntarily to meet their common economic, social, and cultural needs and aspirations through a jointly-owned and democratically-controlled enterprise.”

Another participant said that one of the main challenges in the region remains the Kafala system.

“Our main issue is the Kafala system,” said Abdul Rahman Alghanim, Head of Migrant Workers Office of Kuwait’s Trade Union Federation. “Countries tend to implement the Kafala system rather than implementing their civil law and that is the problem. While labour laws do not cover domestic workers, civil laws protect workers as humans.”

Lydia, who preferred not to give her family name, is a community leader at the Migrant Community Center in Lebanon. She emphasized the importance of coming together and helping fellow workers deal with abuse, exploitation and other violations that migrant domestic workers can be subject to, in addition to engaging in fun activities.

“We talk about our problems,” said Lydia. “We make our voices heard, and ask for our rights. We try to make changes in the lives of the domestic workers and their working conditions.”

The meeting heard accounts of experiences of migrant domestic workers and their cooperatives from around the world. Studying the legal framework in each of the three countries, the workshop explored practical methods and opportunities for the setting up of migrant domestic worker cooperatives, and provided insights into ways such cooperatives could provide employment and other services, while raising awareness of ILO Convention 189, and the right to organize enshrined within it.

“One very important and basic element in ensuring that a cooperative succeeds is that you hold onto the initial goal of setting up that cooperative. Because cooperatives will eventually face a lot of challenges, so if you loose your initial objectives, you may not succeed,” said Fish IP, from the International Domestic Workers Federation (IDWF). “No cooperative is 100 per cent perfect – so another important element is to be innovative when setting up a cooperative.”

Rebecca Kemble, President of the US Federation of Workers Cooperatives, said that even a modest initiative can still go a long way in improving the lives of the women that join.

“In the worker cooperative world, the basic element is the needs of the members. It is about people coming together in an economic enterprise to collectively create jobs and raise their working standards,” said Kemble. “Cooperatives make the space for workers to come together and share their talents and skills and bring what’s individual in them to contribute to that common goal.”

The workshop was organized by the ILO Regional Office for Arab State’s Migration and Governance Network (MAGNET) and its Gender Equality team. 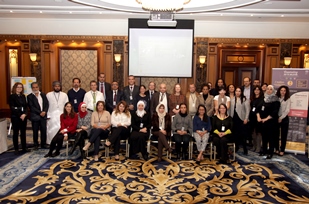 Cooperating Out of Isolation: The Case of Migrant Domestic Workers in Lebanon, Jordan and Kuwait
Skip to top