DEIR EL AHMAR, Lebanon (ILO News) – Amid the rolling hills of Deir el Ahmar in Lebanon’s Beqaa Valley, workers are digging into the rich, orange earth to build a 25 kilometre irrigation channel. Unusually, several of the construction workers are women.

The project is run under the Employment Intensive Infrastructure Programme (EIIP), which aims at creating work opportunities for Syrian refugees and host communities through infrastructure improvement. Implemented by the ILO – with funding from the German Federal Ministry for Economic Cooperation and Development (BMZ) through Germany’s KfW development bank – the project emphasizes decent work for both women and men.

“Being a woman, I had never worked with a shovel or a pickaxe before,” says Ghina Ahmad Mohammed, a 23-year-old refugee from Syria. “I learnt new skills.” She says she earns far more than she used to when she worked in tobacco fields, and will now be able to take her four young daughters to see their grandparents in northern Lebanon for the Eid religious holiday.


Even though women from this area have traditionally worked outside the home, it has mostly been agricultural work, where women are routinely paid half of men’s wages. Motivating women to work in the construction sector was initially challenging, while among the men, there was widespread concern the women would not be up to the job.

At a recent focus group discussion, men employed by the project said that women were not as efficient as men when they started but are now doing just as well.

Women and men said they are comfortable working together because they are from the same village and often from the same extended family or tribe. “We wouldn’t like to work with men who are strangers, and our male family members wouldn’t like us working with strangers,” one woman in the focus group said. Some of the women say they would prefer a women only site.

Both women and men in the focus groups said this was the first time they felt like real workers, with contracts and proper working hours, and that their concerns and expectations are taken into account.

The workers are confident they will be able to use the skills and experience they gained from the project to find more work in the future. But women in the focus group said they could use additional support, pointing out that even though they work alongside men and perform as well as men, they are the first to be laid off when labour requirements are reduced.

They feel they would benefit from training in other skills too, so they can build on the self-confidence EIIP has given them to find other jobs, including setting up their own small businesses.

Both women and men said they hoped they would be involved in new projects. “Why not build a small wind turbine or a small dam for a micro-hydro project? We can help construct these projects which will provide employment, meet our irrigation and energy needs and benefit our communities and families,” one participant said, as others nodded in agreement. “EIIP has been like a blessing and we can make that blessing even stronger.” 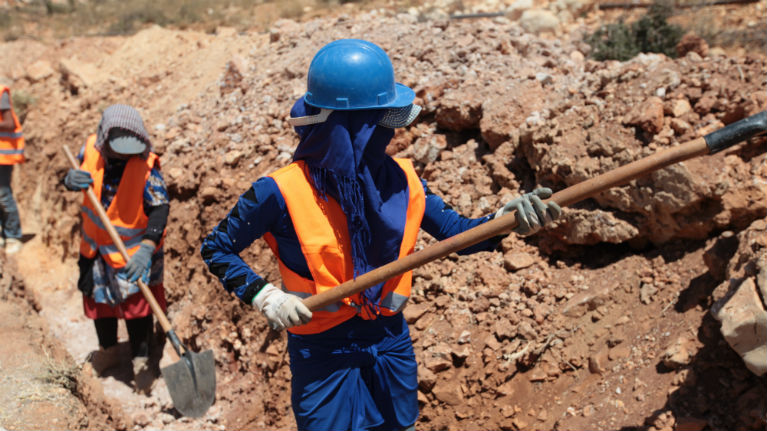