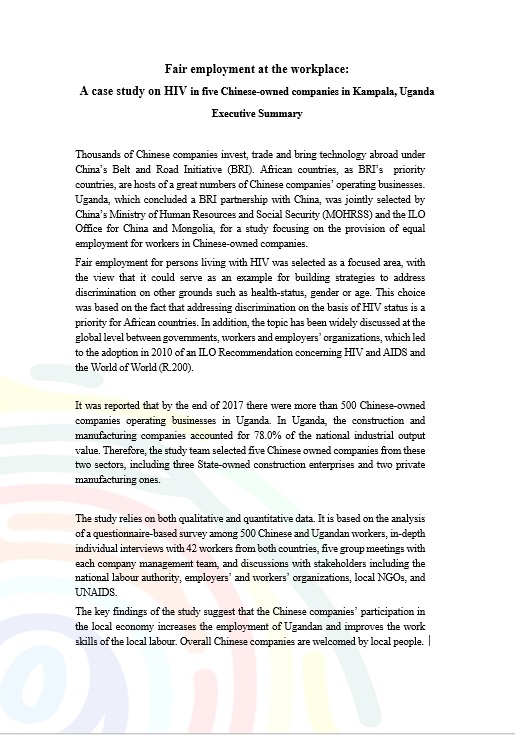 Download:
Thousands of Chinese companies invest, trade and bring technology abroad under China’s Belt and Road Initiative (BRI). African countries, as BRI’s priority countries, are hosts of a great numbers of Chinese companies’ operating businesses. Uganda, which concluded a BRI partnership with China, was jointly selected by China’s Ministry of Human Resources and Social Security (MOHRSS) and the ILO Office for China and Mongolia, for a study focusing on the provision of equal treatment in employment in Chinese-owned companies.

Fair employment for persons living with HIV was selected as a focused area, with the view that it could serve as an example for building strategies to address discrimination on other grounds such as health-status, gender or age.

The study relies on both qualitative and quantitative data. It is based on the analysis of a questionnaire-based survey among 500 Chinese and Ugandan workers, in-depth individual interviews with 42 workers from both countries, five group meetings with each company management team, and discussions with stakeholders including the national labour authority, employers’ and workers’ organizations, local NGOs, and UNAIDS.