Mongolia ratified the Forced Labour Convention, 1930 (No. 29) and the Abolition of Forced Labour Convention, 1957 (No. 105) in 2005. In its latest comments on the application by Mongolia of Convention No. 29 (2016), the CEACR calls upon the government to “pursue its efforts to prevent, suppress and combat trafficking in persons, and to continue to provide information on the measures taken in this regard” and “to continue to take measures to provide protection and assistance, including legal assistance, to victims of trafficking”. The country has not yet ratified the Protocol of 2014 to the Forced Labour Convention, 1930 (P29), which requires to take measures to prevent and eliminate forced labour, including through educating employers and persons vulnerable to forced labour, strengthening and enforcing legislation and inspection services, and ensuring access to remedies such as compensation to all victims, irrespective of their presence or legal status in the territory. P29 also emphasizes the link between forced labour and human trafficking and reiterates the importance of prosecuting perpetrators of forced labour.

As part of its efforts to report to the EU on the progress made in the effective implementation of the ILO fundamental Conventions under GSP+, the Government of Mongolia has expressed its interest in considering possible ratification of P29 to address gaps in the implementation of Convention No. 29. To facilitate the discussion of the prospects for ratification and implementation by Mongolia of P29, the ILO has commissioned the study to be conducted by the Mongolian Bar Association (MBA) with support of the EU funded GSP+3 project.


Objective of the study

To determine the extent to which the national policies, laws, regulations and other measures, as well as the existing practices, give effect to the requirements of P29, taking into account guidance from Recommendation No.203, or would need to be adjusted. This would help to determine the readiness for ratification and key areas of national action. 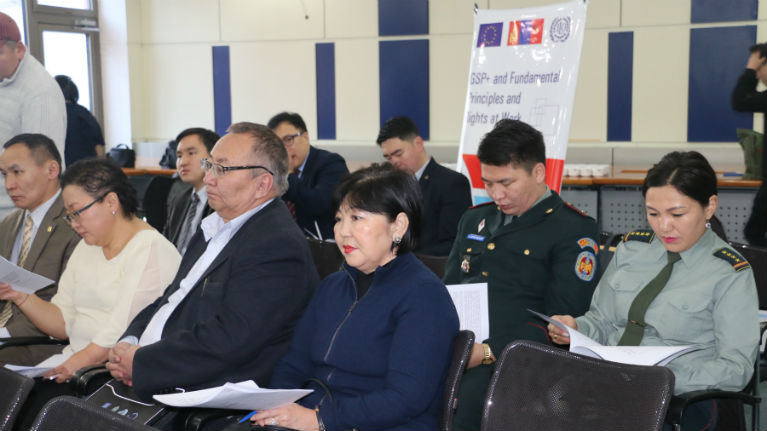 35 representatives from various national stakeholders including the Ministry of Labour and Social Protection, the Confederation of Mongolian Trade Union and the Mongolian Employers’ Federation will discuss preliminary findings of the study.
For more information, click here.