Are persons with disabilities burden of the society? How do they want to be treated? What expressions are acceptable in news reports on disability? Do the media reflect their actual needs? Do people have the right to make decisions for persons with disabilities without their participation? These were among the questions discussed during a two-day seminar on Media and Disability Advocacy. Held in Beijing on 7-8 June 2016, the seminar was co-organized by ILO Beijing Office, One Plus One Disabled Persons’ Cultural Development Center and Disability China, with the support of UNESCO and Handicap International.

More than 40 people (28 women), including 29 journalists and new media practitioners from 24 newspaper and media outlets, as well as communication officers, Disabled Persons Organizations (DPO) representatives and disability experts participated in the seminar. During a one-and-a-half days’ Disability Equality Training (DET), the participants were sensitized to the equal rights, entitlement, social inclusion and participation of persons with disability, the implications of disability issues and the experience of disability and impairment, as well as disability reporting with a human rights-based approach, through a dynamic, focused and highly participatory group work.

Ms Liang Jianmin, a news reporter from China’s Guangdong Province said during the seminar that “persons with disability are often polarized in our reports - they are either too miserable or made a moral model. Portray of persons with disabilities as regular people is somehow missing.” Ms Liang works for Xinxishibao, a branch under Guangzhou Daily which has a circulation of 800,000, and 3 million followers of its social media account.

During the seminar, Participants discussed extensively, based on several media reports case studies, how the media can contribute to fostering respect and restoring positive images of persons with disabilities, in order to promote disability rights and inclusion. Ms Zhang Yaoyao from China Financial and Economic News said that “too much emphasis on their misery cannot do any good to persons with disabilities. From my experience, they don’t want compassion from others. Sometimes a simple record of their story is all they want.”

As part of the seminar, a Media Briefing on the Promotion of Positive Media Reporting on Persons with Disabilities took place on 8 June. The seminar was chaired by Mr Zhou Haibin, ILO project coordinator on disability project. Opening the event, Dr Marielza Oliveira, Director and Representative of UNESCO Beijing Office informed the participants of the joint commitment made by the United Nations and the Chinese Government recently on achieving 17 Sustainable Development Goals in the next 15 years, in which disability is one of the key cross-cutting issues. Since media images and stories have the power to influence thinking and establish social norms, it is also media’s responsibility to nurture public receptiveness to the rights of persons with disabilities, in accordance with the United Nations Convention on the Rights of Persons with Disabilities. Dr Oliveira invited the journalists to spread the word through their news rooms and social media channels, to create more respect, equity and inclusion for persons with disabilities.

Chairperson and Secretary-General of China Association of Persons with lntellectual Disability and their Relatives, and former senior news editor from the People's Daily in China. Mr Zhang Baolin noted in his presentation that everyone has the risk of becoming a person with disability; and equally, everyone has an opportunity to become a positive change maker for persons with disabilities, especially media professionals. He reminded that facts are the origin and essence of news, and encouraged journalists and media practitioners to acquire more knowledge and expertise on disability issues before writing about them.

Chairperson and Secretary-General of China Association of Persons with Psychiatric Disability and their Relatives, Ms Wen Hong noted that persons with psychiatric disability are often unfairly portrayed as perpetrators of crimes in the media because of their mental health difficulties. In fact, it is rarely the case if they receive proper and persistent medical treatment. She further clarified some misconceptions regarding autism, drawing from several recent events concerning children with autism which were heavily reported in the media, showing a serious lack of understanding and knowledge of autism by their parents and the general public. She stressed that it is therefore very important to enhance the medical and community services provided to persons with psychiatric disability.

Professor Qi Jianjian from the Chinese Academy of Social Sciences made an introduction of the implementation of the Family Violence Law in China, which entered into force as of 1 March 2016, with a focus on protection of persons with disabilities guaranteed by the Law.

During the event, a set of Guidelines on Promoting Positive Media Reporting on Persons with Disabilities were also endorsed by the participating journalists.

The seminar on Media and Disability Advocacy is organized as part of a joint UN programme in China, supported by the UN Partnership to promote the Rights of Persons with Disabilities. Implemented by UNESCO, ILO, UNDP and UNICEF, in close collaboration with the Chinese government, the programme provides support to the rights and entitlement of persons with disabilities, contributing to the United Nations Development Assistance Framework (2016-2020) and China’s 13th Five Year Plan (2016-2020). Within the same programme, UNESCO has also been providing support to a national hotline 12385 for persons with disabilities. Launched in 2015, the hotline increased access to information on laws and policies regarding the equal rights and available services for persons with disabilities, with the potential of benefiting the 85 million women and men with disabilities and their families in China. 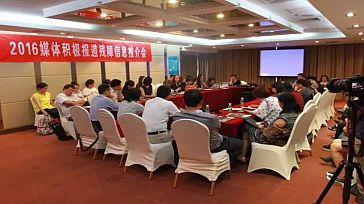